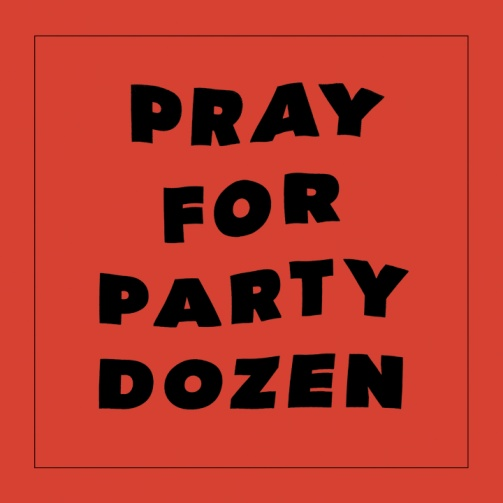 "Pray For Party Dozen" is a typically DIY affair, produced by Jonathan and released May 22nd on their own label, Grupo. The album is the follow-up to their 2017 debut "The Living Man", which established Party Dozen amongst Australia's foremost sonic adventurers. Since then they have played incessantly, performing at festivals as varied as WOMAD, Dark Mofo, Falls, MONA FOMA and Farmer & The Owl, and playing shows with the likes of Liars, Viagra Boys and Tropical F Storm.

The latest taste of "Pray For Party Dozen", following 2019's eponymous "Party Dozen" and the recent “The Great Ape”, comes in the form of "The PDD". Contrasting with the slow, doomy groove of previous single “The Great Ape”, “The PDD” is Party Dozen at their frenetic best, tearing through the track, more punk than rock.

Speaking of the track, the band offer: "If you follow the trajectory of our fictional cult, The PDD is the point after we became less friendly and started to enforce our values. This time was known as the reign of The PDD." Elaborating further they add, "we were definitely inspired by cults while making this record and talked about it a lot, but it's also very tongue-in-cheek. The whole record was meant to be about creating our own little world and we've woven in little bits of cultish shit in the form of photos, font types, colours. 'The PDD' came from a joke about the Party Dozen version of the DDR."

Meanwhile, 'The Great Ape', which was played by Henry Rollins on his KCRW show, has been referred to as "an absolute noise rock scorcher" by Clash and a "skull-shaker" by Music Week, while also being championed by NME, Tom Ravenscroft and Stuart Maconie's Freak Zone on 6Music and John Kennedy on Radio X.

Revisit the video for 'The Great Ape':

Pray For Party Dozen is the perfect synthesis of their renowned live show. Tracks like the aforementioned 'Party Dozen' act as a bridge from The Living Man, where evil sample loops build the foundations upon which the duo erect a brand new temple of irreverence. Elsewhere, they flirt with electro-Krautrock ('Auto Loser'), stoner ('The Great Ape') and even subtlety ('Scheisse Kunst'). It still sounds like Party Dozen, but somehow louder; more hushed; even wilder. Plus there are two songs with lyrics. It’s smart enough to make you move and dumb enough to make you think. But it’s not greater than the sum of its parts. There are no parts – there is only Party Dozen

Listen to 'The PDD':

A limited edition pre-order pack featuring a vinyl copy of the album, a tee shirt and an exclusive Party Dozen prayer candle, lovingly handmade by the band, is available from here on their Bandcamp page.

Commandeur - Live at the Landsdowne