Destroy All Lines by Arrangement with CCA Presents

Japan’s most popular and beloved rock outfit ONE OK ROCK are ecstatic to announce their return to Australia in March 2020 with special guests SET IT OFF and STATESIDE. Filling stadiums in Japan is not enough and ONE OK ROCK are on a mission to bring their brilliant live show around the world and are stepping it up to a whole new level that simply cannot be ignored.

The Australian tour is in support of their highly successful new album, Eye Of The Storm, released in February and the follow up to 2017’s widely acclaimed, Ambitions.

Joining ONE OK ROCK is the incredible SET IT OFF. The LA based band have become known for creating their own soaring brand of pop music, infusing bold electronic elements with driving rock guitar riffs and catchy choruses. SET IT OFF command attention and are more ambitious, more confident and more driven than ever before. Rounding out this incredible triple bill is Australian pop rockers STATESIDE. Having recently supported Simple Plan the Brisbane based powerhouse will be a welcome addition with front woman Erin Rues leading the charge as one of the most dynamic lead singers in Australia.

Tickets for ONE OK ROCK’S first Australian tour in 2017 flew out the door with all 3 shows sold out in under 12 mins. Known for their thrilling live shows, you won’t want to miss out on what promises to be one the best rock shows of the year. 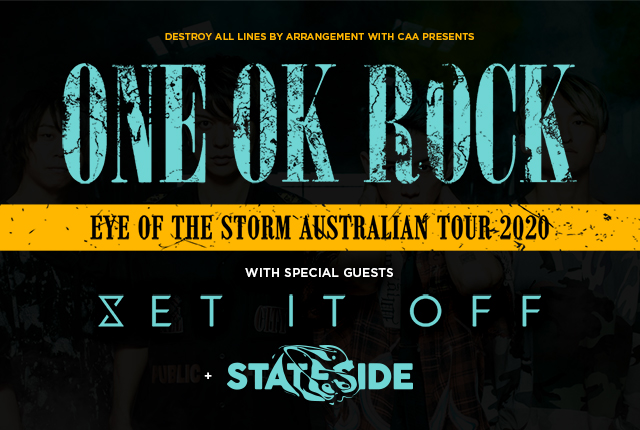