With the ferocity of The Black Dahlia Murder and the sledgehammer force of Aborted and Zeolite, this 'Nightbringers' tour is going to pack far more than a punch to your chops.

Since 2001, THE BLACK DAHLIA MURDER have created a musical brute that embraces all the finest qualities of melodic death metal yet does not shackle them, giving them room to constantly evolve and grow. The latest album Nightbringer released in 2017, delivers a punishing and cutthroat form of melodic death metal with a searing visceral intensity. THE BLACK DAHLIA MURDER continue to inflict a cavalcade of riffs to the table, upping the stakes in technicality, melody, and sheer blunt force trauma.

Australia & New Zealand fans beware, they are on a mission to tear your soul apart.

Like a bulldozer ramming down a rollercoaster, ABORTED return to Australia to smash bodies without remorse, warning, or regret. Emerging from Belgium in 1995, ABORTED have crunched their way through nine full length albums playing a brand of death metal fashioned in hate, and forged with carnage in mind.

With a unique blend of death, groove and tech metal, soaked in political and social commentary, Melbourne based ZEOLITE have earned the job of getting the wrecking ball swinging.

With the ferocity of The Black Dahlia Murder and the sledgehammer force of Aborted, this 'Nightbringers' tour is going to pack far more than a punch to your chops. Tickets on sale now!!! 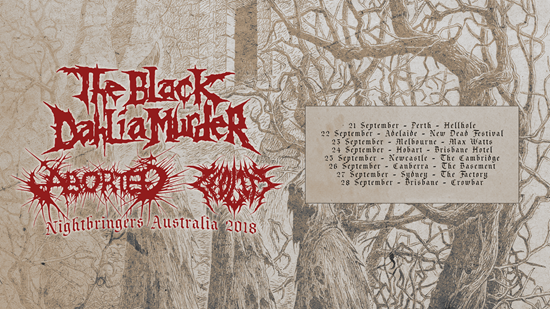 In Hearts Wake | Green Is The New Black Regional Tour 2022

After recently hitting the stage at the local Wacken Metal Battle, and the Jamart Soundlounge “Mosh In A Sanatorium”, Innasanatorium are ready to bring their unique brand of thrash to The Sewing Room for a night of riffs, multi personality style vocals, soring leads, intense drums and booming bass. ... more »

3rd August, 2022 - The internationally recognised Blues Festival is back...
x