Please Note: RSVP does NOT guarantee entry once venue is at capacity.

This year Purple Sneakers turns ten, and to celebrate 'Ten Years Of Taste', the collective has announced an official party at Sydney's Lord Gladstone Hotel, as part of the Vivid Music program during this year's Vivid Sydney, the world's largest festival of light, music and ideas.

Presented in conjunction with friends of UNDR Ctrl and FBi Radio on 18 June, the epic celebration will feature emerging club music from Moonbase Commander, Tashka and World Champion amongst others - alongside DJ sets from friends at some of Australia's best labels, blogs and parties - including I OH YOU, Pilerats, Astral People and of course some old mates who were there where it all began back at The Abercrombie Hotel (cc Linda Marigliano and Levins).

The party coincides with a re-brand and re-launch of the Purple Sneakers blog, and marks the beginning of a series of events and activities to celebrate the collective's ten-year anniversary. Kicking things off is the 'Ten Years Of Taste Mix Series', a ten-part retrospective online mixtape released weekly on the new Purple Sneakers site in the lead up to the Vivid Music event. Listeners will take a journey through the music that's been important to the Purple Sneakers team since they evolved from throwing weekly parties in 2006, to becoming one of the country's most influential and trusted niche music blogs.

Initially conceived as a way to make cash in order to fund a DIY record label, the story began at the now legendary Purple Sneakers club at a sweaty little hole in Sydney, called The Abercrombie Hotel. Growing interstate to Melbourne and other capital cities, the nights gave artists like RUFUS, Alison Wonderland, Flume, Disclosure, What So Not, The Rubens, Ratatat and Flosstradamus some of their first shows - and also had performances from the likes of Mark Ronson, Foals, Death Cab and Vampire Weekend too.

After booking hundreds of bands and DJs across countless weekly and monthly parties in cities across the East Coast of Australia, the team turned their attention to sharing great music across wider platforms - releasing compilations, touring as DJs, launching their blog, and broadcasting a weekly show on Sydney's electronic music focused, digital radio station, FBi Click. Since transitioning into the blog and radio world, the crew have brought with them the same curatorial approach in offering a whole new generation of artists their first premieres and airtime.

For their tenth birthday (which will be their first Sydney event in almost 5 years), the Purple Sneakers team have handpicked a selection of emerging talent they feel will follow in the footsteps of previously Purple Sneakers championed artists, and will lead the next generation of prominent and forward-thinking Australian music. Coupled with DJ sets from some of countries' brightest party runners, labels and blogs - Purple Sneakers' 'Ten Years Of Taste' Vivid Music event is just the first stop in a calendar of must-enjoy celebrations over the rest of the year. 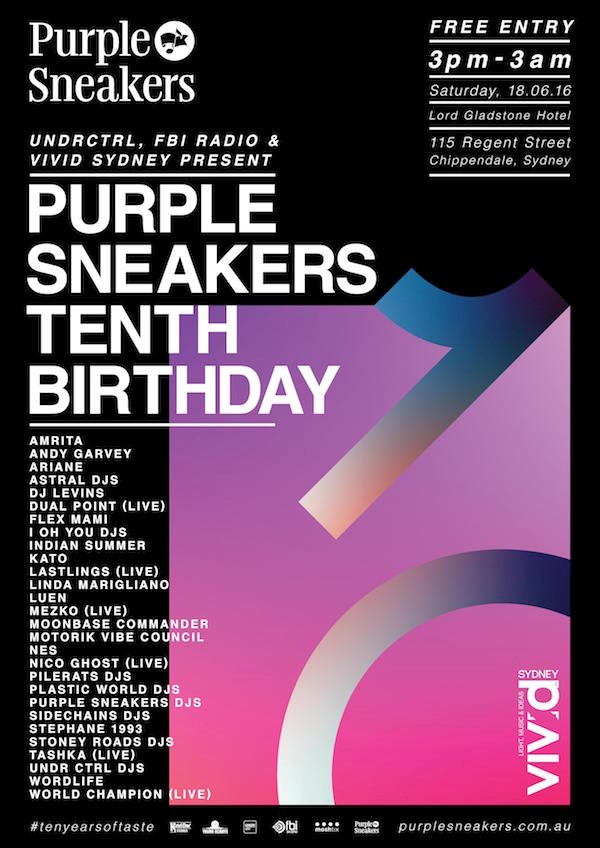 Vivid Music presents a cutting-edge contemporary music program featuring collaborations and performances from local and international acts at various venues in Sydney. Vivid Music is presented as part of Vivid Sydney, the world's largest festival of light, music and ideas. Vivid Sydney is owned, managed and produced by Destination NSW, the NSW Government's tourism and major events agency and runs from 27 May to 18 June 2016. For more information visit www.vividsydney.com/music