wo World-Class instrumental/prog/djent outfits - Canada's INTERVALS (aka Aaron Marshall) and Texas, USA prodigies POLYPHIA - are coming to Australia in September 2018.

Two World-Class instrumental/prog/djent outfits - Canada's INTERVALS (aka Aaron Marshall) and Texas, USA prodigies POLYPHIA - are coming to Australia in September 2018 to destroy minds and people's known perceptions of what can be done with a guitar!

Last in Australia alongside Plini in 2016, INTERVALS is returning to Australian shores for their first headline tour. INTERVALS is a window into the mind of guitarist & composer, Aaron Marshall. Founded in 2011, INTERVALS is a progressive and forward thinking staple in modern instrumental music with roots firmly planted in all things traditional, & an open eye on the future. Aaron's most recently release "The Way Forward" is the natural evolution of Aaron's sound & a testament to his knack for infectious melody, & engaging compositions. In addition to sharing the road and stage with Protest The Hero, Periphery, Between The Buried and Me, Animals As Leaders, Plini and more. INTERVALS will continue traveling the globe to share his passion for timeless guitar driven music.

This will be POLYPHIA's first voyage to Australian shores. POLYPHIA's full-length title 'Muse' was originally self-released in September 2014, where it landed on several Billboard Charts including: No. 5 on Internet Albums, No. 5 on Hard Rock Albums, No. 13 on Independent Albums, No. 22 on Top Rock Albums, No. 71 on Top Current Albums, and No. 76 on Top 200. POLYPHIA followed the success of 'Muse' with 'Renaissance', released March 11, 2016 via Equal Vision Records. The band - whose average age is just barely 21 - is comprised of Tim Henson (guitar), Scott LePage (guitar), Clay Gober (bass), and Clay Aeschliman (drums). POLYPHIA has toured and shared stages with the likes of Animals As Leaders, Periphery, Between The Buried and Me, The Contortionist and more.

The pairing of INTERVALS and POLYPHIA on this tour presents powerful all-round prog/djent goodness which you sure won't want to miss out on, when this tour rolls through your city in Perth, Melbourne, Sydney and Brisbane this September. Don't miss out on this one in a life time experience and secure your tickets now! 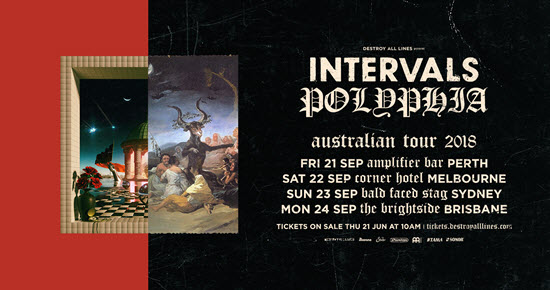 A Broken Sail with Hashashin, Greyhound and Lojets

With The Immigrants and Karly Jewell more »