Revive The Regions With Music

An evening of bush dining and world class entertainment under the stars. 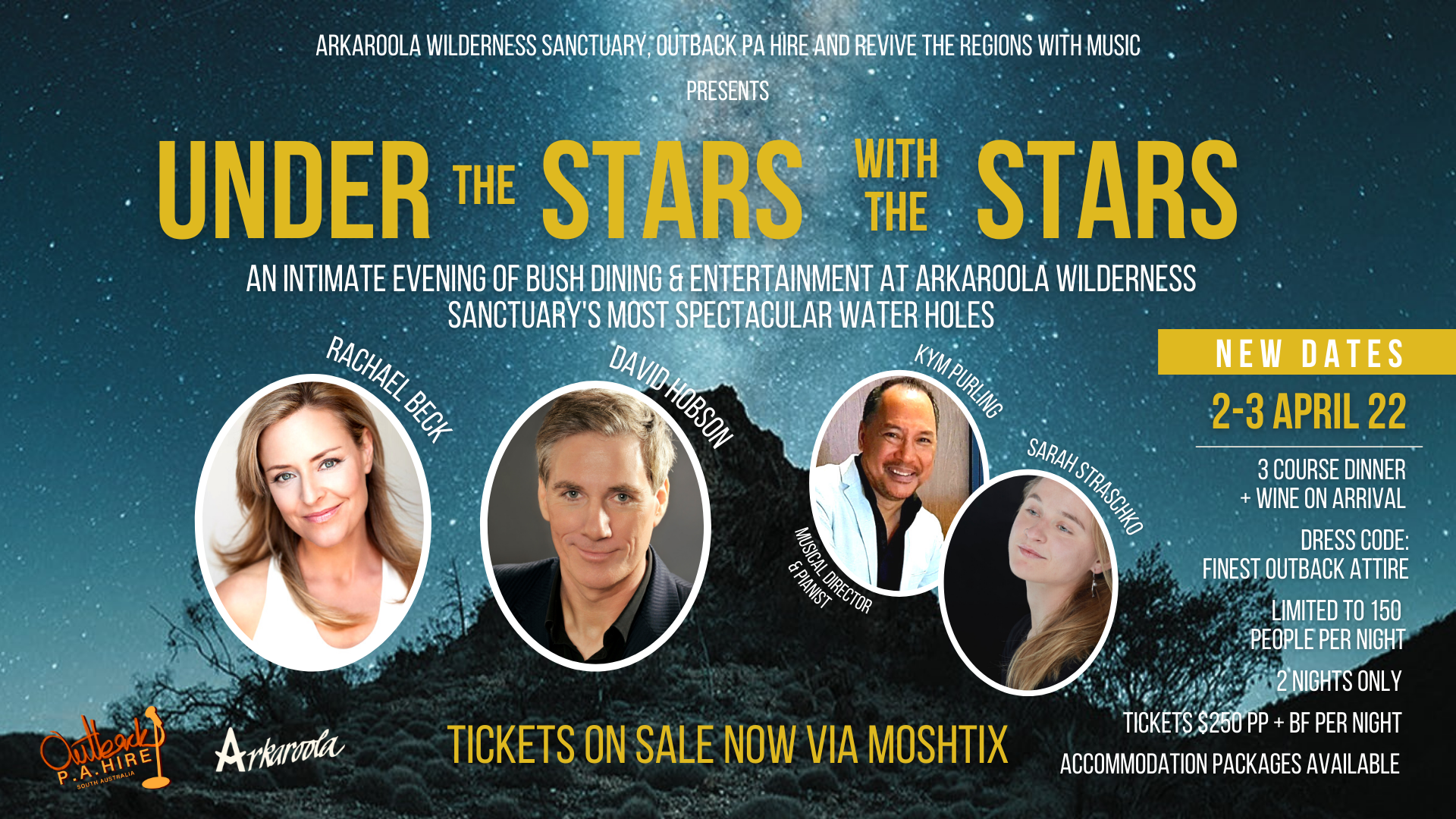 under the stars in Outback South Australia!

Arkaroola Wildlife Sanctuary together with Revive The Regions With Music and Outback PA Hire presents an Intimate Evening of Bush Dining & Entertainment “Under the Stars with the Stars” at one of the Sanctuary’s most spectacular water holes!

Located 600km north of Adelaide in the ruggedly spectacular northern Flinders Ranges, this 610sq km multi award-winning Wilderness Sanctuary is an inspiring destination for artists, aviators, astronomers, adventure bikers, birdwatchers, bushwalkers, four-wheel drive adventurers, geologists and just about anybody with a sense of adventure and a quest for knowledge.

In a first for the sanctuary Australian theatrical stars Rachael Beck and David Hobson will be accompanied by Internationally acclaimed Musical Director and pianist Kym Purling, and the sensational Sarah Straschko for three intimate performances over two big nights!

Set against the backdrop of Stubbs Waterhole, guests will be greeted with sparkling wine while taking in the majestic sunset.   Guests will then be escorted to their seats to commence the first of three courses, delicately prepared on- site by the Arkaroola Wilderness Sanctuary chefs all while being entertained by world-class musicians… for a night unlike any other!

You may know Rachael from her days as “Samantha” on the Aussie sitcom Hey Dad, but where Rachael really shines is on the live theatre stage.   She has starred in Australian stage productions of Disney’s Beauty and the Beast as Belle, opposite Hugh Jackman, Les Misérables, The Sound of Music, Cabaret and Singing in the Rain.  Rachel also released her debut solo album “This Girl” in 2014 to huge acclaim.

Australian tenor and composer David Hobson is one of Australia’s best-known operatic, concert and stage performers, with a repertoire that spans the gamut of musical styles from Baroque through to Pop.

Beginning his career in rock and jazz bands, David’s potential as a ‘classical’ singer was discovered by the Victoria State Opera in the 1980s. He subsequently made his name with Opera Australia in his award winning performance of Rodolfo in La Boheme directed by Baz Luhrmann (filmed in the early 1990s to world wide acclaim). Since then he has gone on to become a well regarded classical performer, major recording artist, most recently a music theatre leading man and a frequent television performer on shows like Carols By Candlelight, Carols in The Domain, Spicks and Specks, Dancing With the Stars (finalist in 2007), It Takes Two(winning with model/singer Erika Heynatz – 2006 and Comedian/TV host Julia Morris – 2008) and a presenter on Foxtel’s Studio. He has performed for Her Majesty Queen Elizabeth in the Great Hall in Canberra and sung at the AFL Grand Final.

Adelaide-raised Kym Purling is a huge name on the international music circuit.  With accolades that fill a Wikipedia page, this man is one of the most accomplished pianists and composers on Australian soil.  From touring with Natalie Cole, The Mills Brothers, Harry Connick Jr, Engelbert Humperdinck (and many, many more) to Broadway Musicals including Miss Saigon and 42nd Street, plus has featured on countless albums.

Hailing from Gawler, many of you would have had the chance to witness the angelic voice of Sarah Straschko.

Sarah's reputation as a charismatic and talented live performer has seen her travel to far parts of South Australia and also the east coast.

We are big fans of Sarah and are delighted she will be joining us to open the evening for Rachel and Michael.

We are beyond thrilled to bring you this once in a lifetime opportunity to experience the musical prowess of such acclaimed performers and musicians, complemented with fine dining that is sure to tantalise your tastebuds at Arkaroola for “Under the Stars with the Stars!”

*Tickets are $250 + BF per night and does not include accommodation

**Ladies, leave your high heels at home, opt for your comfy, stylish flats instead

For a short time, because of our remoteness, Arkaroola Wilderness Sanctuary are only offering accommodation to event ticket holders for that weekend

There’s so much to see and do here, we’ve put together packages, especially for ticket holders.

Phone  Arkaroola Wilderness Sanctuary on 08 86484848 to organise your accommodation activities or let us know any dietary requirements you have for the night.

The outback in  can get very cold at night, we recommend you dress warm and leave your high heels at home!!!

There is a minimum 130kms of unsealed road to get to us- make sure all your tyres are suitable for outback roads, bring a spare and extra water

New Horizons for Brass: The 19th Century Emancipation of the Brass Family