The Hills Are Alive Proudly Present their 10 YEAR ANNIVERSARY

THE HILLS ARE ALIVE!

"A ticket to The Hills Are Alive is worth its weight in gold, as people from all over are packing their tents and picking up a few tins ready to delight in what has become known as the 'Hills vibe'" - Beat Magazine

Grassroots Victorian music festival mainstay THE HILLS ARE ALIVE is blowing out ten candles in 2018 and in true THAA fashion, The Farm is once again set to become the heart of Australian music come March.

A festival curated by music lovers, for music lovers - the past 10 years has earned The Hills Are Alive a reputation for its ahead-of-the-curve line-ups and for discovering, promoting and creating a platform for Australian bands early on in their career. After hosting the likes of Vance Joy, Courtney Barnett, Tash Sultana, SAFIA, Sticky Fingers and Amy Shark, the festival has established itself as a tastemaker's paradise.

"We'd spend the whole year going to out to 3-4 gigs a week, arriving early, watching all the supports and then inviting the bands we loved to come and play on the Hill. For us it didn't matter if there were five people or five-hundred people there. If we loved the music and the show and thought the Hills community would love it, we'd invite them to play" says co-producer Aidan McLaren.

To ring in the double digits, the Hills' crew are inviting a gang of past Hills' favorites and a bunch of new faces to The Farm in 2018. So, forget Spotify. Forget iTunes. Here's one hot as hell, algorithm-free lineup for lovers of good music:

Before the bands, beers and sold-out crowds THAA's co-producers Aidan and Rhett McLaren could never have dreamed that the hilly paddocks of their family farm would one day play host to some of the hottest acts in Australian music.

When it all started you had to know someone to purchase a ticket. Twelve bands played for $100 each to just 330 'friends-of-friends'. They danced, camped, shared drinks and built the foundations of the totally unique vibe that still exists today. The Hills Are Alive has gone on to sell out every single show since.

We're so excited to be celebrating 10 years! The Hills' community is made up of so many amazing people and we can't wait to all gather on the Hill once more. We've got a few exciting things in-store for the anniversary edition so it's going to be a particularly special Hills this year - says co-producer Rhett McLaren.

A decade on, the festival still calls The Farm home. And while you no longer need an 'in' to get involved, true to their roots only 2,500 tickets are up for grabs for their 10th anniversary bash. Tickets also include three nights of free camping and the option to BYO alcohol. There's licensed bars onsite too, including the infamous Edge of the World Bar, that is quite literally perched on a cliff at the very edge of the site.

Aspiring Alice Ivy's and These New South Whales wannabe's can sing their hearts out in the notorious Mr Mooyagi karaoke tent, get bendy during yoga classes, have a mini boogie in the Tiny Dancer rave cave, play some ping pong or field games or partake in the annual Gumboot Toss Competition for the chance to score the coveted winner's trophy and tickets to the 2019 event.

And don't forget, as the sun sets each evening, the whole festival pauses to gather atop the Hill to watch the sinking sun. How's that for memory making.

To celebrate 10 years of The Hills Are Alive, for the next 10 weeks we'll be posting a weekly "Hills' Flashback" on our Facebook page, including some awesome highlights and memories from previous Hills events. Past Hills' goers are encouraged to share their own Hills' photos, videos and memories as well, with a free double pass being given away each week.

The Hills Are Alive!

UNDER 18 / FAMILIES: The Hills Are Alive 2017 is an 18+ event, HOWEVER PARENTS CAN BRING THEIR CHILDREN (12 to 17 - $99 +bf, Under 12 - Free) IF THEY COMPLETE THE FAMILY REGISTRATION PROCESS. The Family Registration From can be requested by contacting The Farmer (thefarmer@thehillsarealive.com.au) once parents have purchased their own tickets.

TICKETS INCLUDE CAMPING. VALID PHOTO ID IS REQUIRED FOR ENTRY FOR ALL PATRONS.   Patrons aged 18 years and over must present a legal form of valid photo identification at the event entry or to access licensed areas, such as a current Australian driver's license (international driver's licenses won't be accepted), State Approved 'Proof Of Age' card or a valid Passport. IMPORTANT INFO ABOUT UNDER 18 PATRONS: UNDER 18 POLICY: Patrons under the age of 18 can attend but must be accompanied by a parent/legal guardian AT ALL TIMES (older siblings or cousins are not acceptable guardians). The parent/legal guardian attending the festival acknowledges that they must complete the family registration process before the event and will remain within 2-3m of their minor at all times, or face eviction from the event without refund. Parents MUST stay within 2-3 metres of your child/ren at all times to avoid any risk of separation, and your child/ren being picked up unintentionally by security. 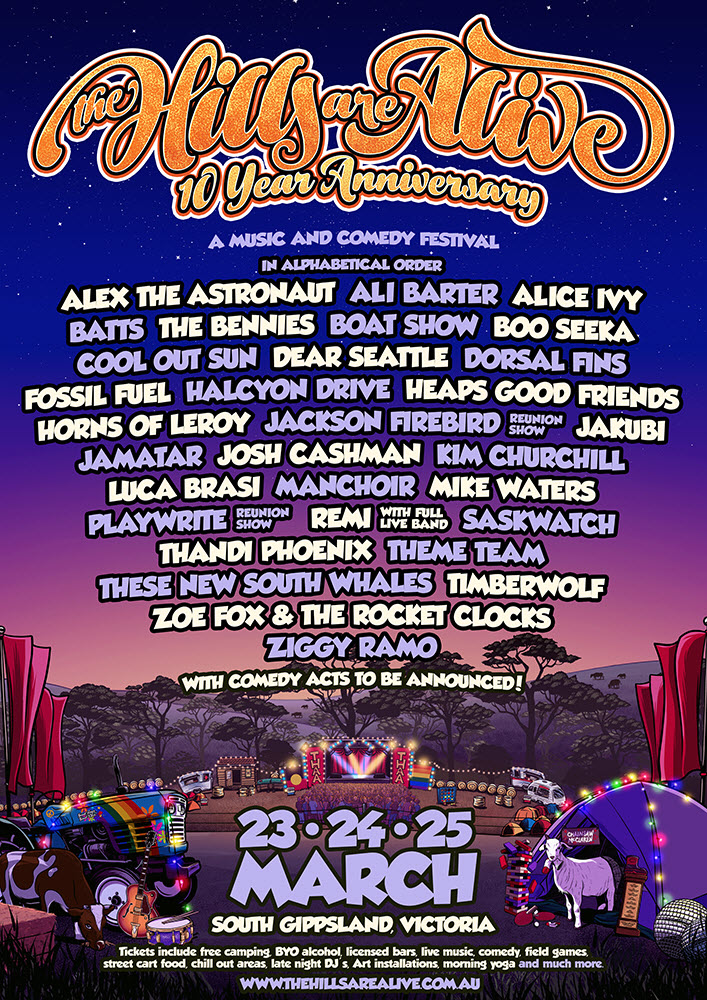 * Line-up may be subject to change.