ADDING THE FINAL TOUCHES TO THE POWERFUL BLUESFEST 2016 LINE-UP:

Including The Mick Fleetwood Blues Band, Eagles of Death Metal, Playing For Change Band and more!

ONLY SEVEN WEEKS TO GO UNTIL BLUESFEST!

Embargoed until 10am AEDT Thursday 4th of February 2016

Today Bluesfest, one of the most exceptional and highly awarded music festivals in Australia, is giving the nation a brand new artist announcement, including renowned artists from overseas and our home shores.

Bluesfest, which is held at its festival site just outside of Byron Bay, are opening the gates in seven weeks for its Easter long weekend celebration (Thu 24th to Mon 28th of March) and acknowledges one of the key ingredients to a successful festival: an eclectic and diverse line-up which speaks to people of all ages and musical tastes.

Californian band Eagles of Death Metal will be making their Bluesfest debut in 2016. The band was formed by singer Jesse Hughes and drummer/guitarist Josh Homme (Queens of The Stone Age) in 1998, after Homme wondered what a cross between the Eagles and a death metal band would sound like. The Eagles of Death Metal recently released their first new studio album in seven years, Zipper Down and coming to Bluesfest is front man and guitarist Jesse Hughes along with touring band, Eden Galindo, Dave Catching (Queens of The Stone Age) on guitars, Matt McJunkins on bass and Julian Dorio on drums.

The Playing for Change Band is returning to Bluesfest for the fourth time in a row. Playing for Change stand for so much more than just music. It is a movement created to inspire, connect and bring peace to the world through music. Playing for Change supports music schools and programs that are created and operated by the local community and then purposefully connect those communities around the world. The band is made up of musicians from all walks of life coming from all over the world and the Playing for Change Band 2016 line-up who are bringing new material to Bluesfest includes; Grandpa Elliott - Vocals (USA), Clarence Bekker - Vocals (Netherlands), Mermans Mosengo Vocals/Guitar/Percussion (Congo), Jason Tamba - Vocals/Guitar (Congo), Titi Tsira - Vocals (South Africa), Tula - Vocals (Israel), Roberto Luti - Guitar (Italy), Peter Bunetta - Drums (USA), Juan Carlos Portillo - Bass (Venezuela) and Keiko Komaki - Keys (Japan) plus special guests!

Also topping this announcement is the legendary and famous Australian Blues band Chain. Since the late sixties and early seventies Chain has been the most influential Blues and Rock band in Australia. Heading to Bluesfest is founding member and guitarist Phil Manning, lead singer and harmonica player Matt Taylor, drummer Trevor 'Trapper' Draper and Dirk Dubois on bass guitar.

Another of Australia's best Blues outfits, the Backsliders are also putting the Blues in Bluesfest this year. Coming to Bluesfest is slide guitarist, multi stringed instrumentalist, songwriter and vocalist, Dom Turner, (also the the founding member of the group). Dom will be joined by drum and percussion virtuoso and songwriter Rob Hirst (Midnight Oil), an acclaimed name synonymous with the best of Australian music, who has been with Backsliders for 16 years. Joining Dom and Rob is one of Australia's most innovative and dynamic harmonica players; ARIA award winning harmonica genius Ian Collard (Collard, Greens & Gravy)

Born in New Orleans, Blues troubadour Eugene 'Hideaway' Bridges is returning to Bluesfest for his eighth visit, delivering his joyous celebration of American Blues Music to his many fans. He's one of the finest Soul, Blues, Gospel, singer and song-writing guitarists you will come across. Eugene's latest album Hold On A Little Bit Longer was released in 2015 in memory of his father, Othineil Bridges Sr. aka 'Hideaway Slim', a Preacher and Bluesman.

Irish Mythen, born and raised in County Wexford, Ireland, is joining the Bluesfest line-up for the first time after being the hit of the recent Woodford Folk Festival, receiving standing ovations and performing multiple encores by public demand. Think back to a time in your life when you heard music that was so powerful and beautiful you were instantly engaged. That very well could have been an Irish Mythen show, an experience in the joy of everything.

Also included in today's announcement is Canadian group Digging Roots, consisting of husband and wife duo Raven Kanetakta and ShoShona Kish. Digging Roots blend Folk-Rock, Pop, Blues and Hip Hop influences and after winning the JUNO award for Aboriginal Album of the Year in 2010 for their album We Are, they are back with their latest album For The Light.

The Canadian talent continues to be announced at Bluesfest with the addition of Frazey Ford, a founding member of Folk trio The Be Good Tanyas. The singer-songwriter, who majestically blends Soul, Folk and Country genres, released her solo debut Obadiah in 2010 and her latest album Indian Ocean (2014) was recorded in Memphis with Al Green's band, the Hi Rhythm Section.

Marshall Okell, who offers up a deep, raw, honest, dirty Blues sound that grabs you by the throat and then soothes you with a sweet, honey-tasting musical medicine, is coming to Bluesfest. Marshall Okell released his fourth album Sipping on Rocket Fuel in 2015, recorded in his home town of Byron Bay, right near the home of Bluesfest.

Sahara Beck is an Australian singer songwriter, who at 19 years of age is capturing audiences all over Australia with her stunning voice and performance. Sahara is an independent artist in the truest sense of the word - an artist finding her own sound and in the process emerging as not just another remarkable voice. Sahara has a new album, Panacea, recorded in Byron Bay and set for release in May 2016.

THE DECEMBERISTS THE CAT EMPIRE

NAHKO AND MEDICINE FOR THE PEOPLE

LUKAS NELSON AND PROMISE OF THE REAL

THE WAILERS THE RESIDENTS

THE WORD THE SELECTER

ABOUT BOOMERANG AT BLUESFEST

The Boomerang Precinct, beside the Jambalaya stage, provides a safe family program of arts and age - old culture and rituals along with workshops and interactive experiences.

First nations musicians will participate in the Bluesfest program, as they always have.

The Boomerang precinct is a destination, and is about more than just the music. A unique cultural exchange, with audiences personally touched by the experience of connecting and embracing the social, cultural and the spiritual aspects of Australia's, and the world's, First peoples' traditional lives and contemporary practices from across the globe.

Audiences will experience living cultures through traditional and contemporary music, featuring some of the world's oldest instruments, dance and rituals.

Language, it has been said, is the light of the mind; combine that with the revitalisation and the return of some ancient traditions and practices from an eclectic line up of artsits, and what you have is uplifting, unique and powerful cultural experiences you might not otherwise have access to.

The Boomerang Festival has the desired aim of ending the disparity between Aboriginal and non-Aboriginal Australia by providing an annual creative event that builds strong partnerships and showcases First Nations' advantage: quite simply, their culture.

So through the healing of music, the rhythm of language and the power of dance, it is time to have fun and gather as we recognsie the similarites we all share. 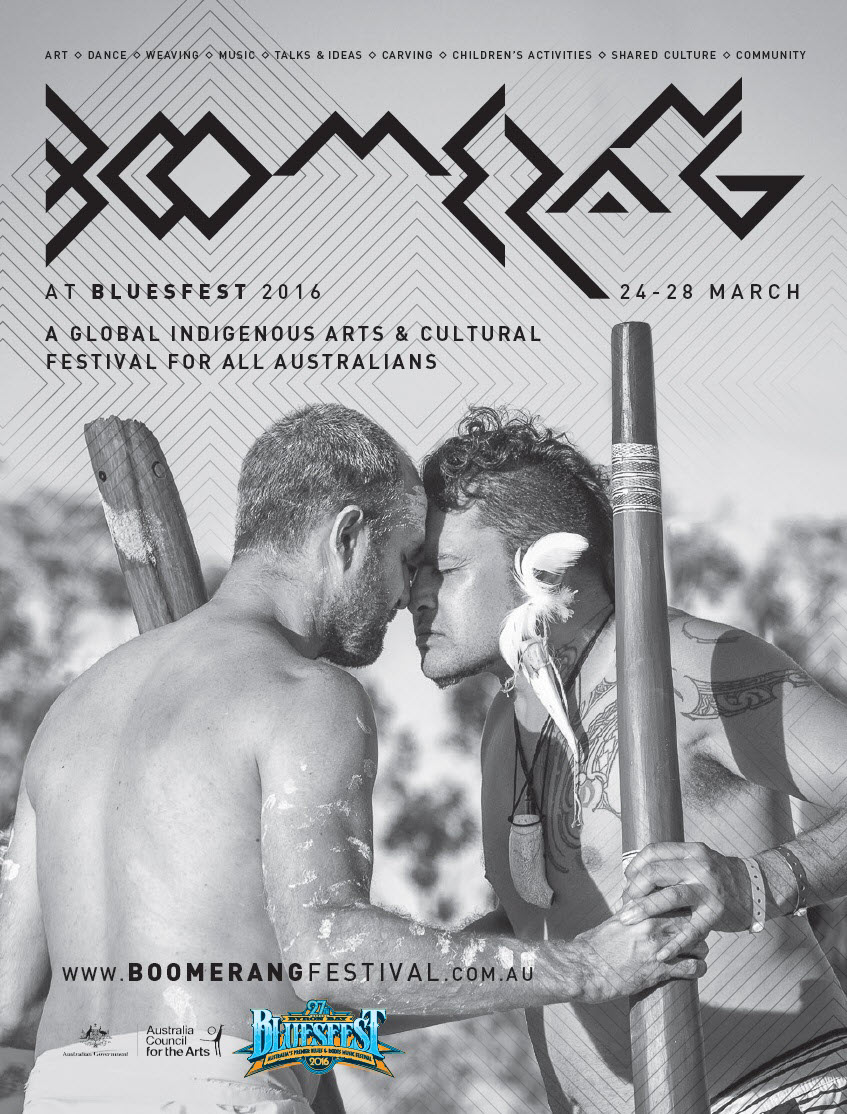 Splendour in the Grass 2021