Grapes of Mirth - Comedy and Wine returns to McLaren Vale

Grapes of Mirth is returning to McLaren Vale!

Five of Australia’s best comedians and your host Merrick Watts will make their way to the Lloyd Brothers for 6 hours of comedy, wine, music, gourmet grub and the most amazing vibes.

This event will have extremely limited capacity, but loads of extra legroom, so don’t mess around with grabbing your tickets. It will be an event to remember after a year to forget! 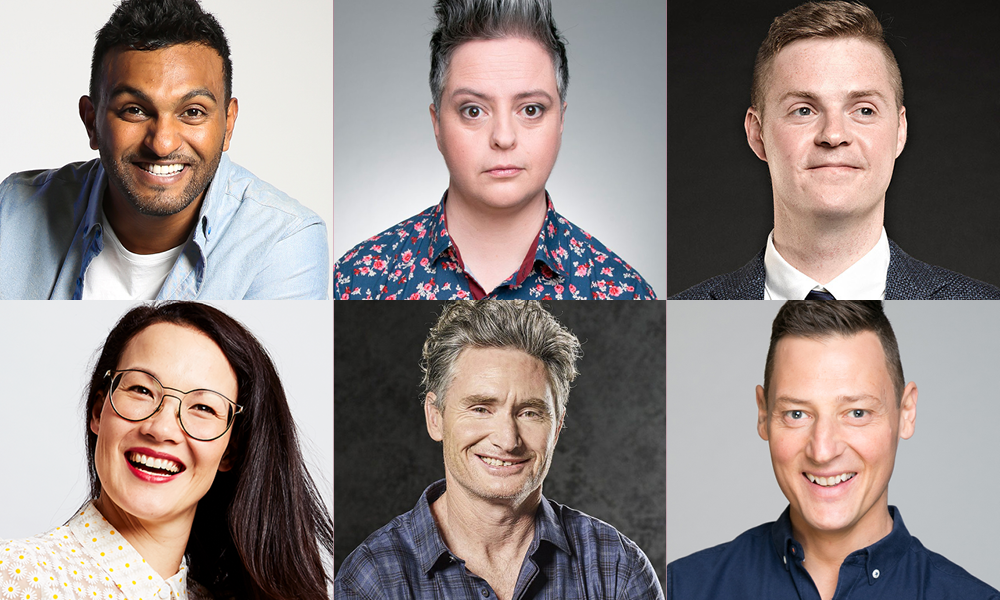 NAZEEM HUSSAIN - One of the biggest stars of Australian comedy, Nazeem Hussain, is a much loved television and radio personality. His Netflix special 'Nazeem Hussain: Public Frenemy', filmed in Montreal at the Just For Laughs Festival, started streaming globally in 2019, introducing Nazeem to a legion of new fans, and critical acclaim. Star of 'Orange is The New Brown' and survivor of 'I'm a celebrity get me out of here', Naz is one of the most likeable comedians in the biz. Super funny, utterly engaging and adored by punters and comedians alike. Don't miss his set!

GERALDINE HICKEY - Star of Channel 9's 'Metro Sexual' and also staring on ABC's 'Rosehaven' alongside Luke McGregor and Celia Pacquola. WINNER of the 'Piece of Wood Award' at the Melbourne Comedy Festival 2019, and nominated for most outstanding show; Geraldine is in red hot stand-up form. A stalwart of the Australian comedy scene, Geraldine has been seen on 'The Oxfam Comedy Gala', 'Upfront: The Queens of Comedy Gala', 'Tonightly' and 'Comedy Next Gen'.

TOM BALLARD - An award-winning stand-up comedian/actor/writer/broadcaster/person who always gives 100%. He’s one of Australia’s hottest comic talents, he’s performed and won acclaim all around the world; Edinburgh, Montreal, London, and he even once roast-battled Jimmy Carr and didn't die in the process. His list of awards are many and extensive and include the Helpmann Award for Best Show and the Pinder Prize, both at the Melbourne International Comedy Festival. And boy, do we miss him hosting ABC's 'Tonightly with Tom Ballard'.

LIZZY HOO - Writer, noodle enthusiast, designer, actor, rugby lover, and rescue greyhound owner. Lizzy is also a stand-up comedian who has rapidly become one of Australia’s most exciting new voices. In 2018 she was invited to perform at the prestigious Just For Laughs Festival at the Sydney Opera House, with her spot broadcast on Network Ten and Foxtel’s Comedy Channel. Lizzy performed her first solo show Hoo Am I? (What’s My Name?) to sold-out audiences at the 2019 Melbourne International Comedy Festival.

DAVE HUGHES - The host of 'Hughesy We Have A Problem', 'The Masked Singer' and one half of  HIT Network's 'Hughesy & Ed'. Dave is back for another Grapes of Mirth stint after appearing at the very first GoM event in early 2017. The great man is in great form and it's great to have him back!

MERRICK WATTS - The "Merric" from Merrick and Rosso. Mez, as he is affectionately known, has worked at almost every radio and TV station in the country. You might have seen him recently getting smashed in the face on 'SAS Australia'; Australia's REAL reality show. Mez loves wine, so much so that he's a qualified sommelier, with dreams of retiring to a big Chesterfield, smoking a cigar and drinking Cabernet.

Grapes of Mirth provides the ultimate day out with five headline comedy sets, a host with the most, and some sweet DJ tunes (brought to you by the one and only, DJ PEDRO MOSHMAN!) to keep you entertained before, between, and after the comedy has ended.

THIS IS AN OUTDOOR EVENT (byo picnic rugs and chairs)

Please note, due to COVID tracing measures, all tickets names must match the name of the attendee. This will be confirmed on entry with valid ID.

Lloyd Brother's beautiful grounds will be set up with areas to accommodate picnic blankets, low and high back foldable chairs. Please BYO picnic rugs and BYO foldable chairs, to make yourself nice and comfortable for the day. The lower you are to the ground, the closer to the stage you'll be. Empty soft cooler bags and water bottles are also permitted (please no eskys). Bag checks will be conducted upon entry for prohibited items.

If you purchase bus tickets for transportation to and from Lloyd Brothers, we will communicate pick up and drop off times in due course.