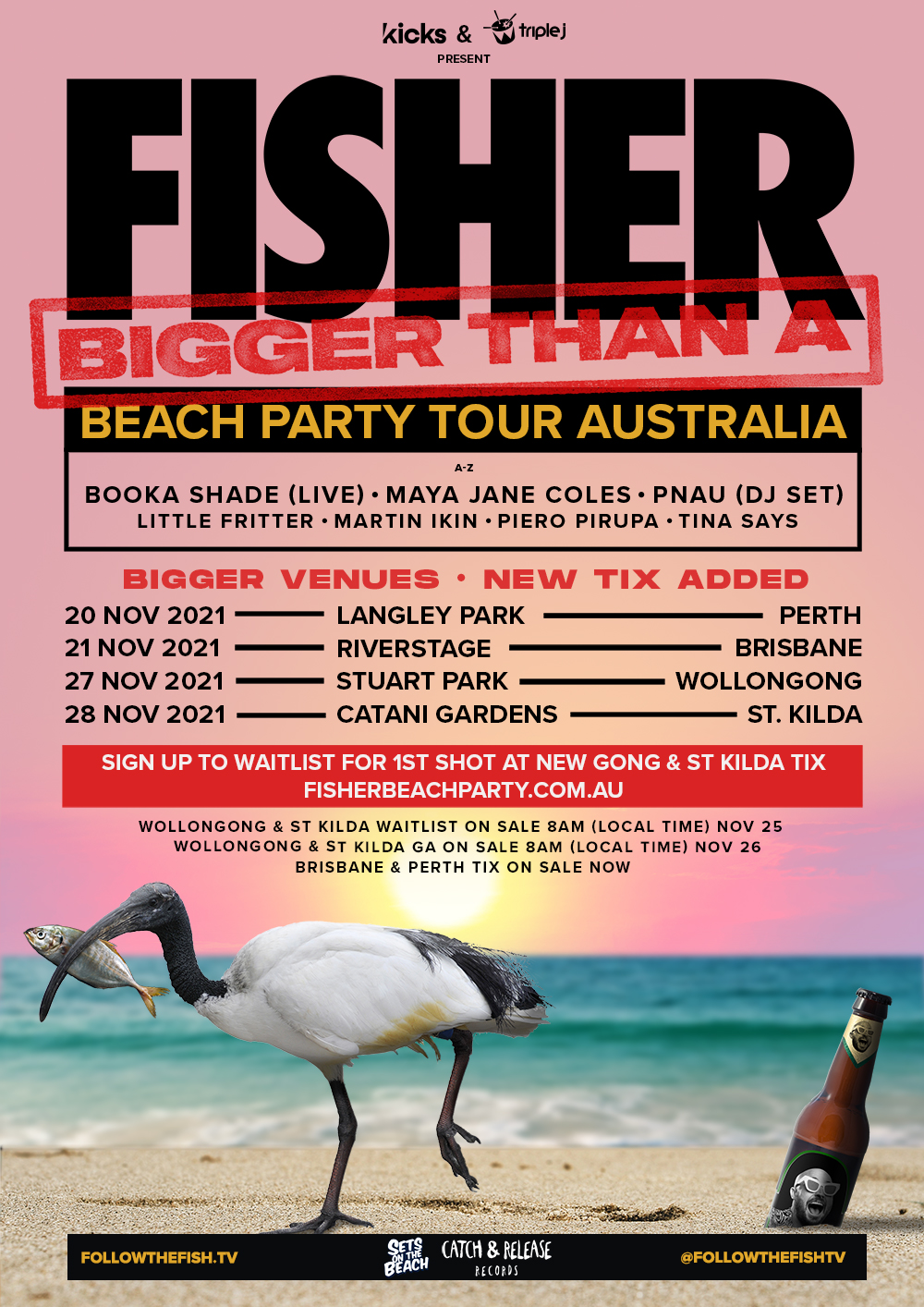 AND HE’S BRINGING A FEW MATES

In partnership with Sets on the Beach

*Venues have been upgraded

Fisher has put together a who’s who of his Australian and international mates for his first-ever headline tour on Australian soil, including Booka Shade (live), Maya Jane Coles and PNAU (DJ set) to St Kilda, Fremantle, Wollongong and Brisbane.

The former pro surfer turned viral DJ sensation, Fisher gained international acclaim on the grammy-nominated dance hit, “Losing It”, making it one of the most played tracks in 2018. His meteoric rise has since taken him to some of the biggest international stages, including Coachella, Tomorrowland and Ultra Music Festival, playing alongside some of the most exciting acts in the dance music scene. The Fisher Beach Party Tour will bring together his favourite acts from all corners of the world before punters experience a highly infectious and energetic set from the vivacious producer himself.

Hailing from Germany and renowned for their captivating and high energy sets, veteran techno duo Booka Shade will return to Australia to support the tour with a full live performance. Since finding success with their club hit single “Body Language”, the dynamic duo will take to the stage to prove why they are one of the world’s most adored electronic acts.

Joining the lineup will be none other than underground electronic sensation and 2019 Ibiza Awards winner for ‘Best Deep House DJ’, Maya Jane Coles. Australian royalty PNAU will also take to the beachside stage, primed to deliver another energy-fuelled DJ set of electro-pop bangers and dancefloor anthems.

Added to the long list of supports, Italian tech-lord behind anthem ‘Braindead’ Piero Pirupa, UK-producer and Fisher’s “Catch and Release” labelmate  Martin Ikin, Sydney’s very own Little Fritter, and Western Australian rising star  Tina Says, who made her mark on the scene with her club hit ‘Elevate’.

The announcement follows Fisher’s return to Australia to play a one-off Dance for Disaster Bushfire Appeal on Sunday, January 12, raising over $250k for the bushfire relief.

The Fisher Beach Party Tour will kick off on March 28 and will take over some of Australia’s most iconic beaches including St Kilda Beach, South Beach (Fremantle), North Beach (Wollongong) and Riverstage in Brisbane. Sun-worshippers and festival revellers alike, this is a sand between your toes, hands in the air party not to be missed.

Grab your mates and lock in the date - beachside capacity is strictly limited and tickets are expected to sell out fast!

Who's Ready For the Biggest Music Fest!!!! more »

NYE At The GLASSHOUSE