Frontier Touring & I OH YOU

CELEBRATE A DECADE WITH THE 10 YEAR ANNIVERSARY TOUR

Three albums. Two ARIA Awards. 10 years! This September DZ Deathrays will celebrate their decade-long career with the DZ Deathrays 10 Year Anniversary Tour,
presented by Frontier Touring. The tour will see the thrash party duo play their biggest headline shows to date with a swathe of friends along for the ride.

'There might only be three people on stage, but DZ Deathrays pack a heavy punch and continue their run as one of Australia's must-see rock acts.' - The Music
'...the possibilities of writing music built on the simple foundation of guitar, drums and vocals seem somehow boundless.' - The Australian
'Ridley is a total beast on the kit, with a concussive kick drum that feels like a punch to the solar plexus, and a snare drum so tight we feel each crack of it in our Achilles tendon.' - Hysteria
'DZ Deathrays' Bloody Lovely is a punch in the face, and we want another one.' - Happy

A run of shows not to be missed, each stop on the DZ Deathrays 10 Year Anniversary Tour will be treated to a city-specific festival-style line up. Main support on all shows are Canadian punk heroes PUP, who boast two incredible albums; their self-titled debut (2014) and The Dream Is Over (2016) featuring the triumphant 'DVP' .
After kicking off at Fremantle's Metropolis on September 13 with The Love Junkies and Foam, the tour continues at Adelaide's HQ on September 14 with Ali Barter and Horror My Friend; Forum Melbourne on September 15 with Ali Barter, Yacht Club DJs and Press Club; Sydney's Enmore Theatre on September 20 with Gooch Palms, Straight Arrows and Polish
Club DJ set; before finishing up in Brisbane (DZ Deathrays' birthplace) on September 21 with special guests and a Velociraptor DJ set.

The DZ Deathrays story began in their hometown of Bundaberg, Queensland where the worlds of two music-loving mates collided. Fast-forward a few years and the duo were causing an absolute ruckus at Brisbane suburban house parties, honing their craft as a duo - Shane Parson on vocals and guitar and Simon Ridley smashing the drum kit.
' The Mess Up ' was the band's first public foray and featured on their independently released debut EP, Ruined My Life (2009). Following a chance meeting at an afterparty for The Presets, the band signed a record deal with I OH YOU. Their first full-length album Bloodstreams in 2012 was the turning point for DZ. The album included favourites 'Dollar Chills' and ' No Sleep ', the video for which featuring comedian Arj Barker who has gone on to become a frequent feature in DZ Deathrays' videos. Bloodstreams also saw the band win their first industry awards, nabbing an ARIA Award for Best Hard Rock/Heavy Metal Album and an AIR Award for Best Independent Hard Rock Album.

Their sophomore effort Black Rat followed in 2014, featuring relentless bangers ' Gina Works At Hearts ', 'Less Out Of Sync', 'Reflective Skull' and 'Blood On My Leather' which make up an absolutely explosive 11-track LP that won the duo their second ARIA Award for Best Hard Rock/Heavy Metal Album.
Earlier this year, DZ's third full-length Bloody Lovelydropped earning the band a spot in the ARIA Top 5 at number 4. Tracks ' Shred For Summer ', 'Like People' , ' Total Meltdown ' and latest single 'Guillotine' flagged the progressive return of one of Australia's most loved duos.
Over the course of their career DZ have received widespread critical acclaim, graced covers of magazines, featured in some of the most revered publications including a double page spread in the seminal NME and received extensive streaming and radio support including on the UK's BBC Radio 1.

On the touring front, the band have toured throughout the US a number of times and played on some of the world's festivals including Reading & Leeds. This year alone, has seen DZ open for Foo Fighters at Brisbane's Suncorp Stadium, play to fans in China and South Africa, and sell out their Australian album tour. They'll hit the stage at Splendour in the Grass later this month before taking their electrifying live show to Europe and the UK.

Don't miss DZ Deathrays at the peak of their game - with a collection of legends to help with the setup - throw some of the biggest parties this September on their 10 Year Anniversary Tour
. Frontier Members can access pre-sale tickets from Monday 9 July (2pm AEST), before tickets go on sale to the general public on Thursday 12 July (10am local time). 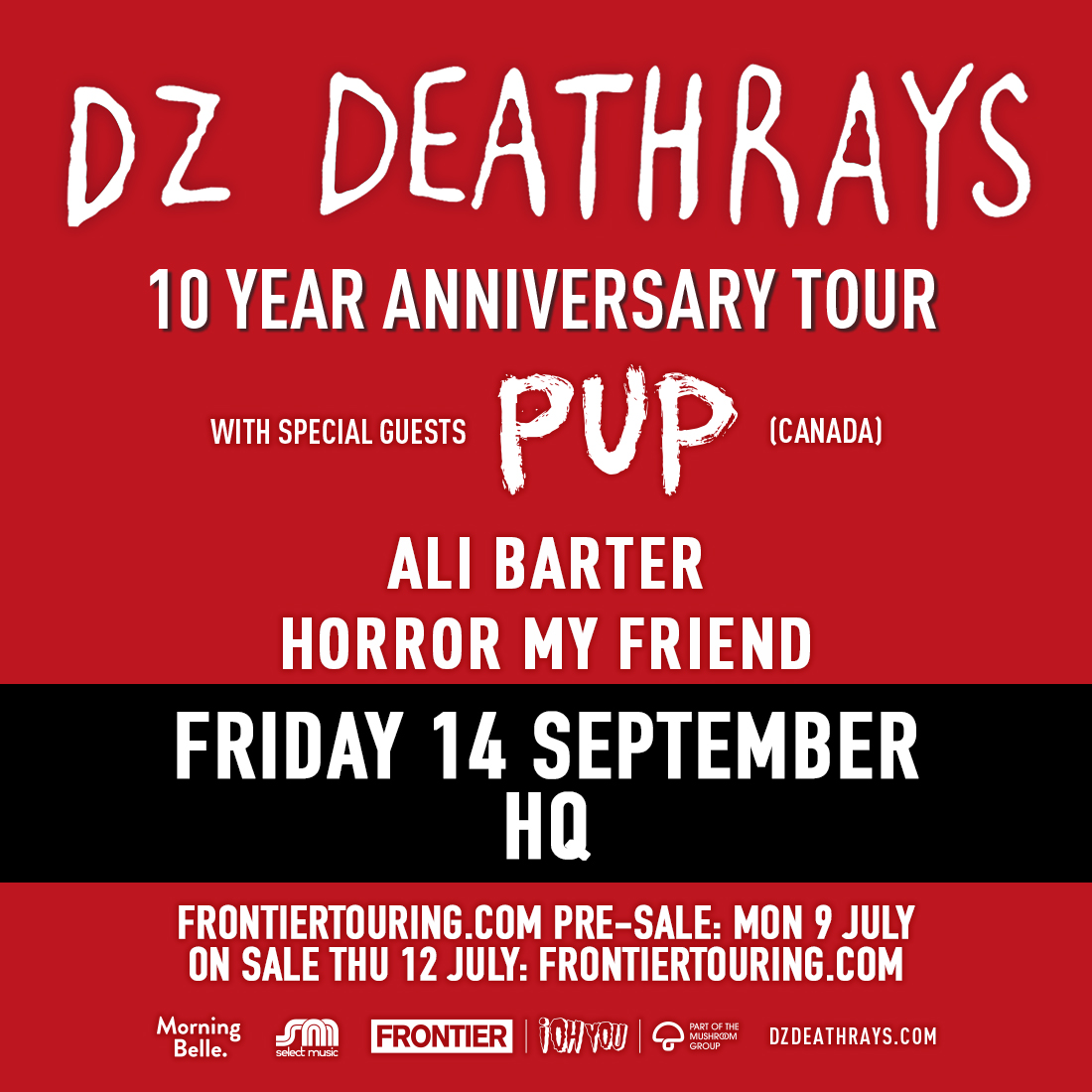 The Rats are back Join Ezroh, Adelaide Acid and the Rats for a big night of music, dancing and good times with our very own Alien Frankie! An epic musical and visual adventure a year in the making, you won’t want to miss it. Come party with us. more »

MaRLo Altitude – Rise As One Adelaide