URTHBOY IS BACK WITH FRESH NEW SINGLE 'CRUSHING HARD' AND A HUGE TOUR ANNOUNCEMENT FOR MARCH 2017.

2016 saw the release of his most successful album to date, The Past Beats Inside Me Like A Second Heartbeat, as well as a sold out national tour and spots on some of Australia's best festivals.

With barely any pause to catch a breath, Urthboy delivers a completely unique single out of nowhere, the unexpected slow banger 'Crushing Hard'.

Written as a 'part two' of 'Wade In The Water', the closing song on his 2016 album, 'Crushing Hard' steps into new territory for the rapper:

"It uses a lyric from that song and springboards into a completely different space in the same spectrum of love. If Wade in the Water is about an enduring love that is wonderfully imperfect and turbulent and real-Crushing Hard is about the impatient intensity that leads up to it. It's also about not having the emotional maturity to come out and simply tell the person you like that you have a crush on them.'

A notable element of 'Crushing Hard' is Urthboy's melodic singing in the first verse-a vulnerable performance illustrating an ongoing desire to break new ground, cementing his reputation as a songwriter with many hats. Production by Max Mostley (a German hip hop producer) accompanies the vocals subtly with its orchestral touches, accentuating the drama of heartache.

Urthboy will be taking the 'Crushing Hard Tour' around Australia in March/April 2017, with supports from the enigmatic Joyride (playing live) and multitalented Alice Ivy. 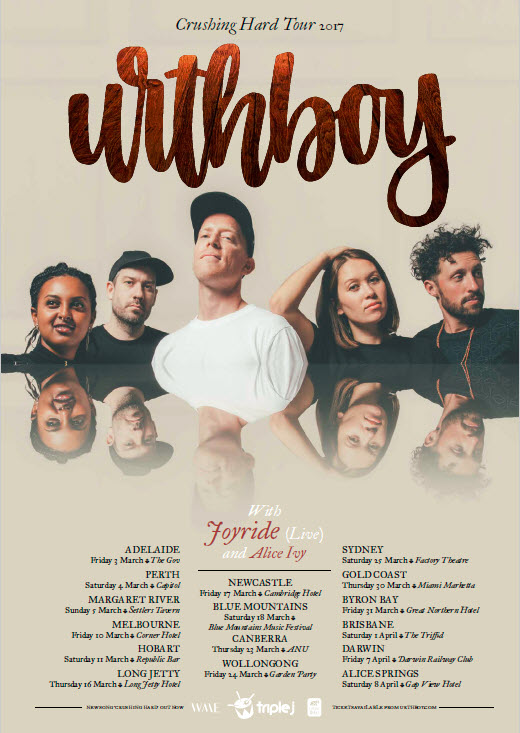