Due to ongoing developments with current world health issues, the continuously changing circumstances, and with the best interests and wellbeing of everyone involved, SOUNDWORKS DIRECT sadly has no option but to postpone the upcoming THRASH BLAST GRIND tour.

This has been another incredibly difficult decision to make, but one we feel is the best to make at this point in time.

Ticket purchasers will receive a refund via point of purchase.

We urge everyone to please be patient during the refund process.

We sincerely apologise for all disappointment and inconvenience caused by these decisions made.

We are 100% committed to rescheduling these tours to a later time frame when world health issues settle.

THRASH BLAST GRIND TOUR is back to appease the neverending bloodthirsty hunger of metalheads all over Australia and New Zealand this coming May!

This year sees KING PARROT celebrating their 10th anniversary as a band and what better way to do it than headlining the ever-evolving Thrash Blast Grind tour alongside Exhumed, KING and Theories. Like a pitchfork to the skull King Parrot will tear through your eyes, ears and brain with their well renowned reckless and savage live shows.

It's been a long time coming, but EXHUMED are finally back with their ghastly and gore drenched death metal formula. With their new album ‘Horror’, Exhumed, through their sonic meat grinder continue to churn out the repulsive and splattered chunks of aural carnage they are known for.

Chopping out their own grisly niche, THEORIES bring an intense and inscrutable sound to the Thrash Blast Grind table. Arising from the USA, this three headed chaos outfit will outstrip the under prepared right from the get go. 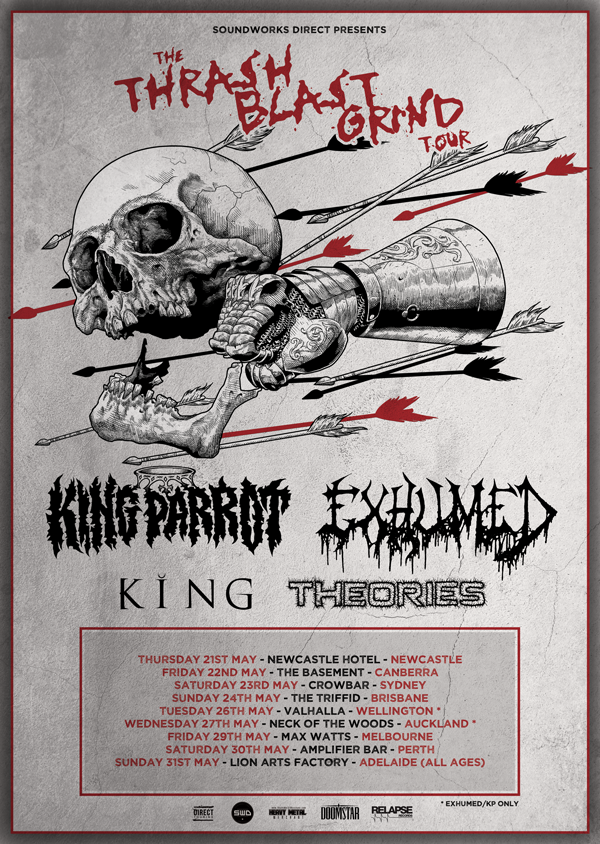 “Night On The Strip” LA style right in your Home Town! more »

Groovin the Moo Is Not Going Ahead In 2020

17th March, 2020 - The unfortunate news was announced today that Groovin...