LIVE AT YOUR LOCAL PRESENTS 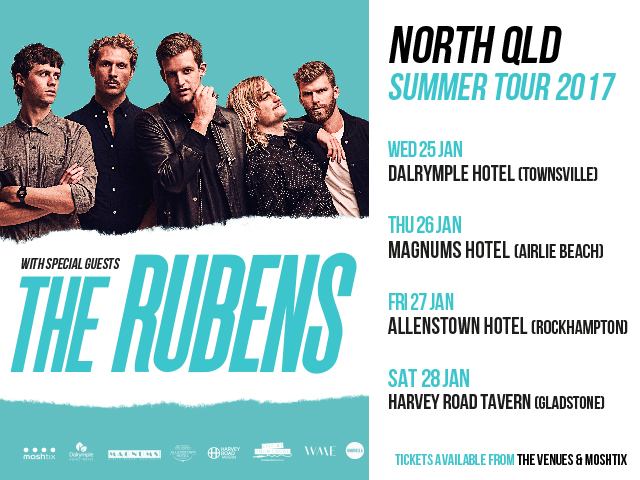 Australian four-piece The Rubens make soulful, melodic rock music. Formed in 2011 in Menangle, New South Wales, the Rubens include brothers Sam Margin (vocals/guitar), Zaac Margin (guitar), and Elliott Margin (keyboards/vocals), as well as longtime friend Scott Baldwin (drums). In 2012, they released their self-titled debut album, which sold well, getting certified platinum and garnering them a J Award nomination for Album of the Year.

2016 has proven to be the largest year to date for The Rubens. They kicked off 2016 by taking out the coveted #1 spot on triple j's Hottest 100 music poll and selling out shows at Sydney's Hordern Pavilion and The Tivoli.

'It suggested the difference between a band that could merely carve out a decent career in front of adoring Australian audiences, and one that could really show the whole world a thing or two' - Sydney Morning Herald

'The Rubens' live show is passionate, lively and bright, made of genuine soul and nothing less' - Rip It Up

Iconic Aussie exports The Cat Empire have today announced that the original 20-year line-up of the band will be playing their final shows together this December. more »

Battle Of The Rock Bands