THE OFFICIAL SPLENDOUR IN THE GRASS PRE-PARTY 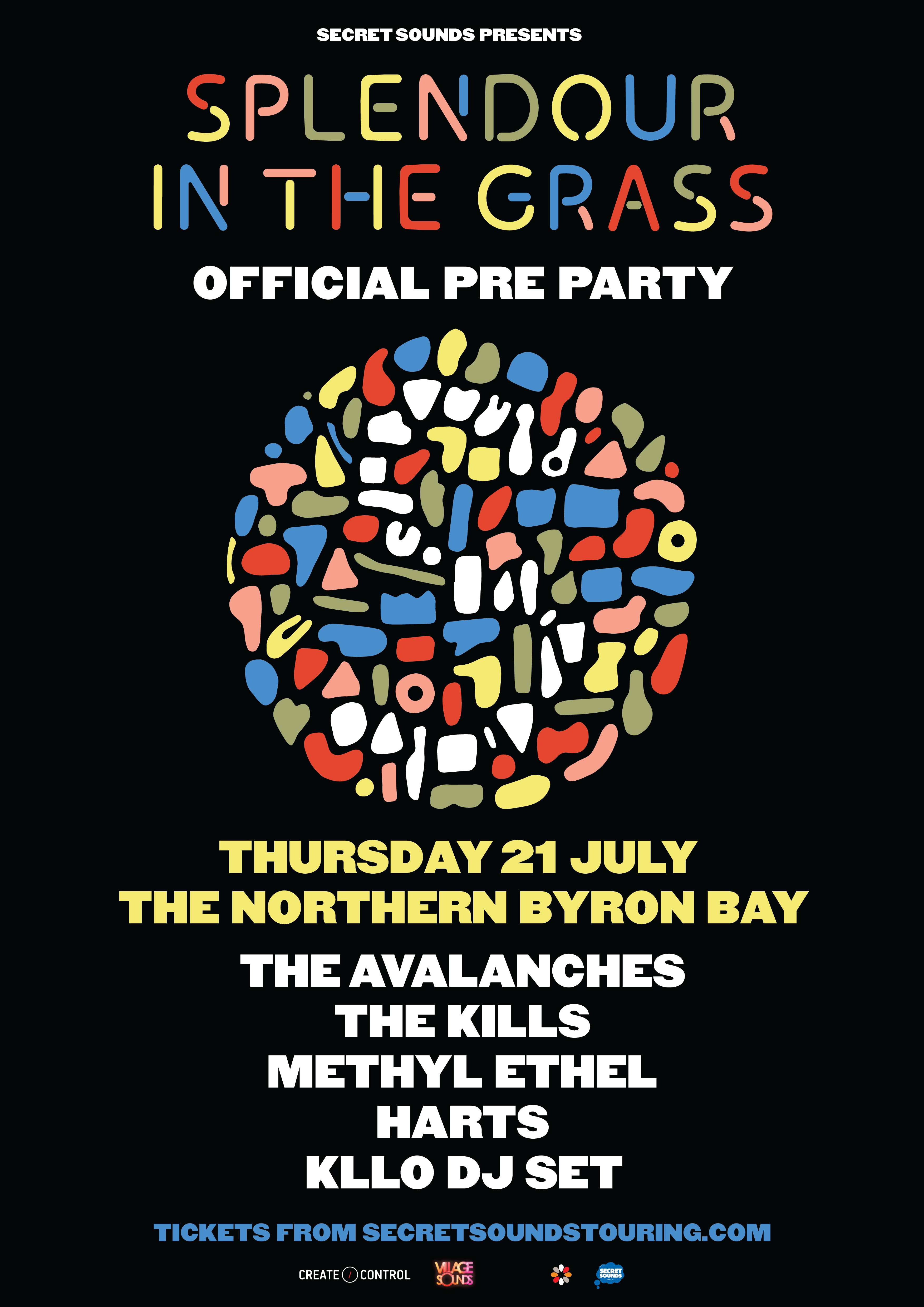 Every year Secret Sounds throw a legendary pre-party at The Northern in Byron Bay that makes you wake up regretting going so hard on day zero... this year won't be any exception, we're back with one of the biggest line-up in pre-party history! Tickets are extremely limited, remember to sign up to the Secret Sounds mailing list for pre-sale tickets.

We've been teased and tormented for sixteen long years, but it's finally time - The Avalanches are back! Before premiering their highly anticipated live show at Splendour in the Grass, fans will be treated to a sneak preview at the Byron Bay Official SITG Pre-party. Take a minute or two to let that sink in... it's actually bloody happening! The Avalanches' sophomore album Wildflower has arrived and the band have well and truly come good on their promise of a worthy follow-up to their debut Since I Left You, which is (let's be honest) one of the most revered and important albums of all-time. Before the release of Wildflower, we got a taste of three completely diverse tracks 'Frankie Sinatra' featuring Danny Brown and MF DOOM, 'Colours' featuring Mercury Rev's frontman Jonathan Donahue and finally the dreamy funk-trenched 'Subways'. Yep, Wildflower is going to blow our minds, and we're giving you a chance to see it come to life!

Let's get one thing straight, The Kills are the most fearless forward-thinking duo in rock & roll, period. Bristling with tension, anxiety, sex, and unstudied cool, their pre-party set will be the first time in five years since Jamie Hince and Alison Mosshart graced Australian fans with their presence. This time they'll be armed and dangerous with their brand new album Ash and Ice, featuring the ultra sexy single 'Doing It To Death' and your old favourites from their steamy back catalogue.

Making the trip east to party is Perth trio Methyl Ethel, the uninhibited alt-pop project from musician Jake Webb. Methyl Ethel have blossomed into one of the most critically revered and publicly embraced acts out of Australia in recent times. 2015 saw the fellas hone their signature sound and swagger on debut LP Oh Inhuman Spectacle and its accompanying singles 'Twilight Driving' and 'Rogues' (awarded 2015 WAM Pop Song of the Year). After a completely sold out Australian tour, Methyl Ethel have just played their first ever UK and European shows. It's good to have you home, boys!

We challenge you to find a more talented artist in the country than Harts. The master of vocals, guitar, bass, drums, keyboards, and production was anointed by the late, great Prince himself as an artist in his own image, and with whom he spent time jamming with at his Paisley Park Studios in Minneapolis. You can hear that influence, as well as those of other legends like Stevie Wonder, Jimi Hendrix and Queen in his current hit single, 'Peculiar'.

On DJ duties will be Melbourne duo Kllo, with their dreamy brand of electro-pop. The duo's been playing a tonne of sold out Australian shows and a string of local and international festival slots including Dark Mofo, The Great Escape and Primavera Sound. Kllo has skyrocketed back into the international spotlight unleashing two new hits 'Boldie', which In The Mix named the #6 best song of the year and the newly premiered banger 'Walls to Build'.

You will not receive a Ticket for this event. You will be required instead to present your legal form of identification such as, a current Australian driver's license, 'Proof of Age' card or valid Passport that matches the NAME of the PURCHASER. Purchaser and Attendees must arrive together to gain entry.

Please also be aware that all mobile phones and camera devices must be checked in to the venue cloakroom upon entry. They will be kept safe for the duration of the event, and can only be collected once it has finished and you are leaving the venue for the night. Anyone caught taking photos or videos will be evicted from the venue, so we strongly suggest leaving them at home... who needs social media when you're at the party of the year anyway?!

Splendour Pre-Party Staff will take great care when handling property to ensure that damage or loss does not occur. However, in the unlikely event that damage or loss does occur, we accept no liability and will not compensate for any lost or damaged items. It is your responsibility to look after your wristband, we accept no liability if any loss or damage occurs from a lost wristband.

Holding down the fort back in Brisbane? Remember there's pre-party for you too, kicking off on Thursday July 21st at The Triffid, with Years and Years, Lido, Moonbase Commander and Twinsy. Tickets on sale now from secretsoundstouring.com

For all details on official Splendour In The Grass sideshows go to secretsoundstouring.com

Recognised globally as one of the best beer festivals in the world, Australia’s biggest craft beer specTapular is back! more »