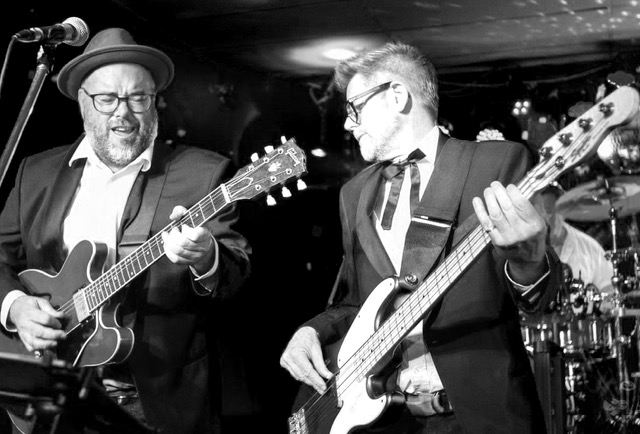 The Cross Eyed Cats hail from Fremantle (mainly), Western Australia, and have been playing some bloody good blues for nearly 20 years (really? is it that long?) The Cap’n – Glenn Carpenter – stands front and centre with his guitar, voice, and a pedal board so big it has a mezzanine floor for overdrives. Delivering songs in a style reminiscent, some may say, of a bullfrog sippin’ whisky sour. Character? I should coco!

On the right hand of The Cap’n stands Sweetlips Fitzpatrick. Grinding, prowling and bending the draw, his affinity with a much travelled and world weary Fender Junior Blues is legendary. He challenges the capabilities of the harmonica with an ever-cheery demeanour and smoothly stylish shirts. Don't blink or you'll miss him wrangling his Pacifica slide. Fearless in his pursuit of a good swell and a tasty suitcase, he may just be evolving into the digital age......

Muscling in on the harmonica stage pocket is Lindsay Gouldfingers Gould, blowing a super saxy tenor. Gouldfingers wondered into a Cats rehearsal room by mistake a while ago and he hasn't quite worked out how to leave. The addition of a real musician to the band has forced some serious navel gazing from some of the other members concerning their ability to keep the wool over his eyes for as long as possible.

At the left elbow of The Cap’n is Da Pumpkin. The moniker’s genesis long since lost in the swirling mists of Cats folklore, he ties up the low end of town with a simple, straightforward, no frills approach, in the style of a latter day Wyatt Earp contemplating his options at the O.K. Corral. True to the code of all blues bass-men, he has yet to change his strings.

Stoutly striking an imposing figure behind an equally stout collection of hardware is the latest recruit to the family of da Cats, Graham Baggy Shorts Temby. Don't let the lack of long pants deceive you – he's definitely past the Cub Scout stage. Historically associated with bands of rowdy rock and twangy pop, he now seeks serenity in the sanctity of the blues. Bowing to peer group pressure, he has performed the necessary surgical release of his snare skin tension. He still hasn't worked out how to fit his drum kit on the Harley though.

Steadfast in their unwavering commitment to having a Great Time and playing Bloody Good Blues, The Cross Eyed Cats set list includes about half of their own creation, about a third are creative interpretations of old blues standards and about one sixth (do the maths) are fair and square covers of tunes the boys love. Regrettably, you won’t be finding any KC and the Sunshine Band in their repertoire.