South Australian indie-Americana band Sturt Avenue are releasing their debut album ‘How Do You Think It Should Be?’ Sturt Avenue is an Adelaide-based collective led by SCALA award-winning singer/songwriter Bryn Soden and supported by a cast of family and friends, built from a strong foundation of community.

Bryn explains: “The album title is in essence the question I was asking each of the band members as we brought these songs together. While the lyrics and chord progressions were written by me, when it came to the process of turning them into actual real-life songs, my goal was to give everybody the space to do what they do best. I wanted this record to feel like a band record rather than a singer-songwriter one.”

Catalogued across these eleven tracks is a true account of an awkward transition to adulthood, complete with love, nostalgia, sorrow, heartache, joy, yearning and profound happiness. The album is infused with indie-folk, Americana, country, rock and blues sounds, and draws influence from Conor Oberst, The Mountain Goats and Big Smoke.

To celebrate the release, Sturt Avenue are putting together an evening of live music at the Crown and Anchor Hotel on Friday, June 25th. Joining them in celebrating this momentous occasion are rising stars Eli & the Truth and talented newcomers City Feet.

Eli & the Truth: Eli and his humble truthers and their songs aim to explore the well known and highly regarded genre of anti-folk-pleasant-punk-mystery-power-pop, in ways no other band has done before. Their live performances have been described as “emo, but happy”, and “you guys remind me of this band…. give me a second, I can’t remember what they are called”. Eli and the truth aim to to write and perform songs that make you say, “what a hit”, and “these guys are going to be massive”, while still attempting to take simple pop songs in a new and exciting direction.

City Feet: This latest outfit to Adelaide's scene brings you an engaging blend of high energy anthems and emotional melodies. City Feet intuitively holds these elements together with intricate rhythms and crunchy guitar lines. The band formed with Jo and Matt jamming out demos on their own home setup, only to have the songs complemented by Jess, Erin and Sam who would later join the band. This loveable, queer 5-piece strives to make an impact on the community, especially those who are seeking a place to belong and feel connected.

Don’t miss out on this excellent evening of live local tunes! Tickets available online for $10 plus booking fee, or for $15 on the night. 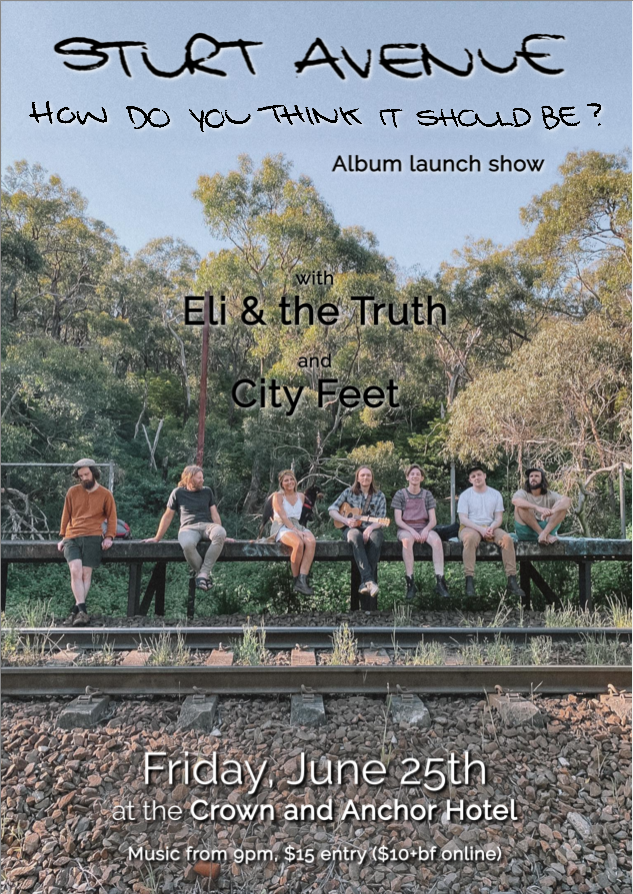 Clint Boge will be venturing across borders for an intimate evening at Jive Adelaide - focusing on crowd favourites from The Butterfly Effect, his solo releases and a taste of upcoming works for good measure. more »

After a few years in hiatus and a short stint in France playing some golden oldies, the St. Morris Sinners are back! more »

Clint Boge will be venturing across borders for an intimate evening at Jive Adelaide - focusing on crowd favourites from The Butterfly Effect, his solo releases and a taste of upcoming works for good measure. more »