PARADISE CLUB Above Me Tour Adelaide

Maestros of melancholy delicacy and guitar borne dream-pop, Paradise Club are back with their first musical offering for 2019; 'Above Me'.

2018 was action packed for Paradise Club, seeing the Adelaide four-piece pick up the coveted title of triple j Unearthed feature artist in January, open the Adelaide leg of Laneway Festival, released two brilliant singles in 'Away' and 'Heart Of Gold' and scored the main support slot for both Endless Heights and Trophy Eyes' national tours. Not ones to let a good rhythm get away, the band were the first to be taken under the management wing of newly launched Planet Shhh - brainchild of West Thebarton's Josh Healey and Tom Gordon, and are taking 'Above Me' on the road with a five date single tour this July/August.

Honouring their reputation for creating songs that make you want to both take to the dance floor and take some time out to reflect, 'Above Me' explores the tempestuous emotions that crash against each other in different facets of our lives.

With their signature emo-dream stylings binding gracefully with an ever more present pop influence, the band continue to tell stories of the intricacies of human relationships, almost like the soundtrack to an indie film. Layering sweet, shimmery guitar melodies with pulsating beats that reflect the influence of dance and electronic music on their writing, Paradise Club are cutting a groove of their own. 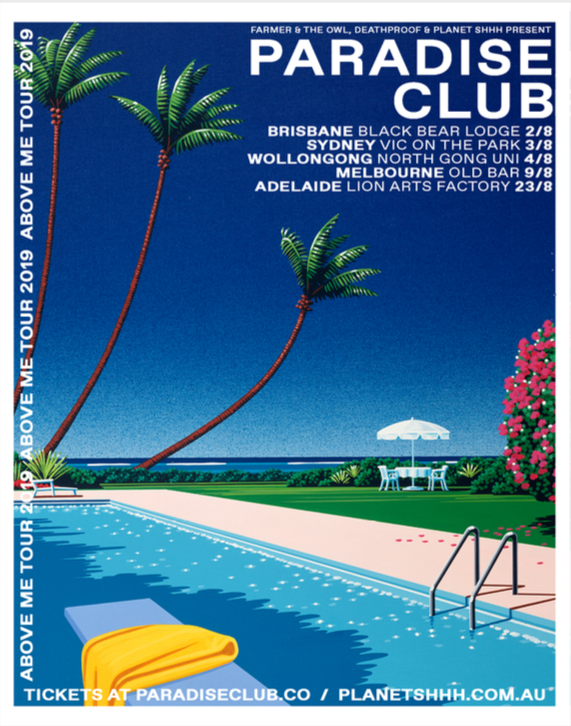