Hotel Esplanade, VIC
If you checkout without making all the selections you are entitled to, you will be able to return at a later time and choose your remaining options (simply log in to your Moshtix account and return to the event page). 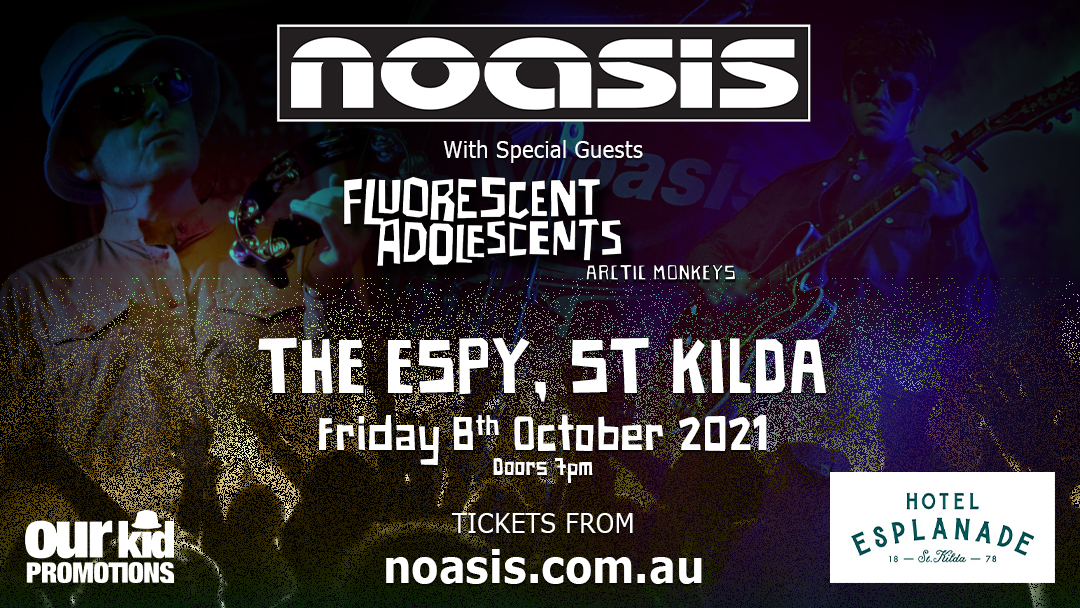 Originally formed in England during the 90s and now permanently based in South Australia, Noasis have fast cemented themselves as Australia’s #1 Oasis Tribute act playing sold out shows to thousands across the continent since early 2020 in some of the country’s most iconic music venues.

On Friday October 8th, the Espy brings you a tribute to two of England's biggest bands in one monumental show when Noasis returns to Melbourne as part of their 2021 Australian Tour with Artic Monkeys Tribute Fluorescent Adolescents as their special guests for a night of rock mayhem and more swag than anyone can handle.

See the boys perform all the anthems that defined an entire generation including Roll with It, Supersonic, Cigarettes & Alcohol, Morning Glory, Go Let It Out, Some Might Say, Gas Panic, Hindu Times, Don’t Look Back in Anger, Wonderwall and more!

Whether you got to see Oasis 50 times or never quite made it to the front of the phone queue, this show captures the spirit and magic of what it was to witness one of England’s greatest rock bands. Delivered with attitude, style and in your face rock ‘n’ roll like it was originally intended.

With both Fluorescent Adolescents and Noasis together, this truly promises to be a night of era defining British music. So, grab your mates, bucket hats, shades and get set to go off for a show that promises to be the closest thing to the real thing… and an incredible night out. C’mon, you know.