One year on from the success of their potent performance at Download Festival Australia, NEW YEARS DAY will touch down for their first-ever Australian headline tour in March 2020.

Most recently touring North America with the likes of Halestorm and In This Moment, New Years Day will kick off their debut headline tour in Adelaide on March 19 and onto Melbourne’s 170 Russell and Sydney’s Factory Theatre before finishing up in Brisbane on March 22.

Tickets for all shows go on sale at 11am this Thursday, June 27.

My Live Nation members can be among the first to secure tickets during the 24-hour pre-sale beginning at 10am Wednesday, June 26.

The Australian tour announcement comes less than three months since New Years Day unleashed their fourth and current studio album, Unbreakable (out now through Sony Music Australia). A follow up from 2015’s Malevolence, Costello announced the 12-track offering as a metal pop album to “reflect our renewed vibe and energy.”

Produced by Mitch Marlow (All That Remains, In This Moment) and Scott Stevens (Halestorm, Shinedown), Unbreakable is described as a dozen intense, boundary-melding songs that may touch on metal or goth, but are ultimately undeniable modern rock ‘n’ roll tunes, no-holds-barred, done the New Years Day way. The album is home to the ultra-melodic single “Shut Up” and the booming, ultra-dynamic “Skeletons” which surpassed one million worldwide streams. To date New Years Day has racked up more than 44 million U.S. streams and counting.

Ash Costello said “We are so thrilled to be coming back to Australia.  We have only ever been once to play download festival and we couldn’t believe how incredible he crowd was! So we immediately all agreed, we had to come back as soon as we could! So we will see you March 2020!” 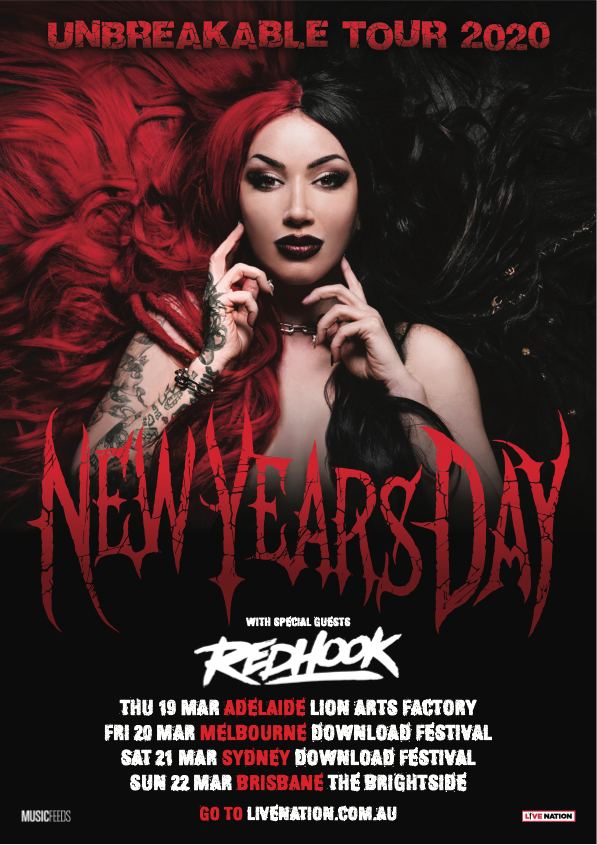