The Sydney Ice Dogs will be fighting for a good cause as they team up with the Warringah Bombers to pay tribute to Matt Clark and fundraise for the Leukaemia foundation.

There are buses from the Northern Beaches heading to and from the game as well as an after game function at the Long Reef Surf Club. There are plenty of ticket packages along with Matt's Story below. We hope you will join us on what should be a great night. 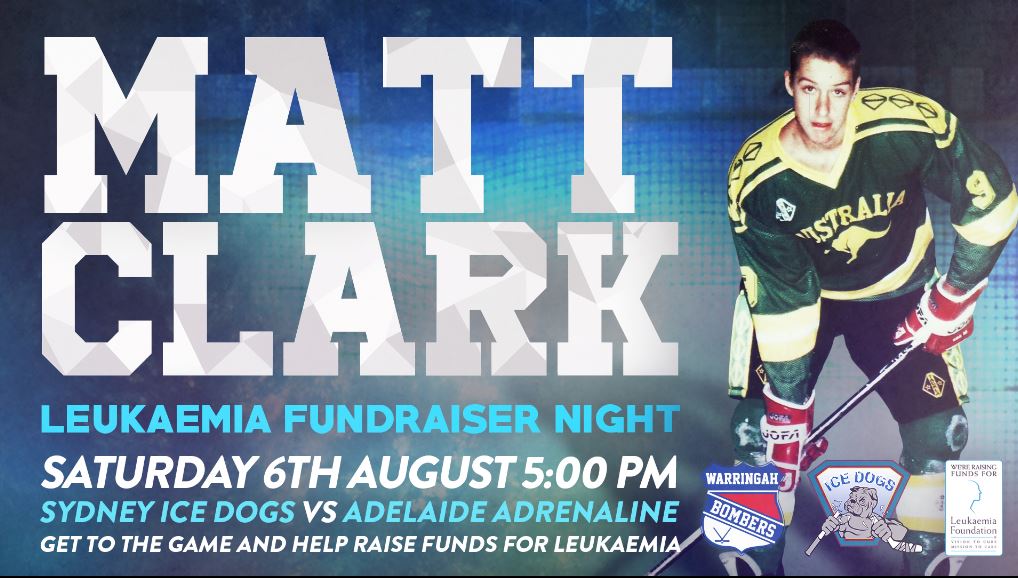 Matt was a football player, representing his club, his school and his state. When Corey, his younger brother started to play ice hockey Matt decided to give it a go. He joined the Bombers in 1991, aged 14. He progressed so fast that in 1992 after just 18 months on the ice he was assistant coach to Ronald Mann in the Australian Ice Hockey Development Council Skills School at Narrabeen Ice Rink.

After just 2 seasons on the ice at 16 Matt was a Midget and was chosen to represent Australia in the "10th Asia-Oceania Junior Ice Hockey Championships" held in Seoul, Korea. This team for the first time in Australian history brought home the "Fair Play" Cup.

Matt's last wish was that his friends and family find a way to raise money for leukaemia research. The Bombers used to hold Matt Clark Memorial Games from 1995 to 2001 and contest for the Matt Clark Shield.

Tickets to the Game:

Bus to the Game (includes Game):

The Warringah Bombers and Ice Dogs have also arranged buses to and from the game. To catch the bus please purchase the bus ticket. More info below:

Tickets to the Game and Function (includes Bus):