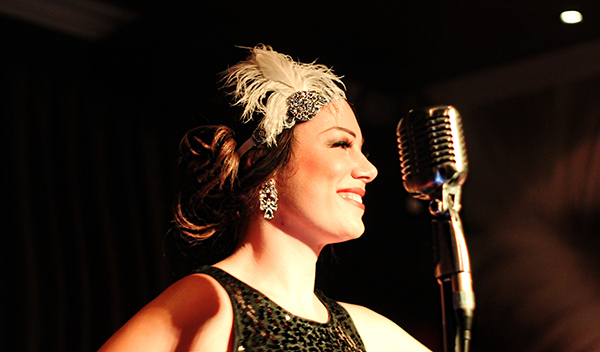 Together with her quartet Cathrine Summers presents ‘Let’s Misbehave - The songs of Cole Porter’, a unique lively sophisticated collection of songs from arguably, the greatest American lyricist and composer in one – Cole Porter. Enjoy classics such as I Get A Kick Out of You, , I’ve Got You Under My Skin, Night and Day, De-Lovely, Let's Do It, Let's Fall in Love, What Is This Thing Called Love and many many more.

After a slow start to his career, Cole Porter began to achieve success in the 1920s, and by the 1930s he was one of the major songwriters for Broadway musicals. Porter’s output of over 2000 songs is an amazing quantity to achieve in a lifetime and Summers respectfully and intelligently presents some of these toe-tapping favourites intertwined with tid bits of Porters conflicted, slightly risqué, acclaimed life.

Cathrine’s ongoing passion to bring Jazz music to audiences in a fun, engaging way across WA sees her performing her shows in places where previously people wouldn’t have had access to live music in this kind of a jazz lounge club sophisticated setting.

“The quality that sets her apart from other singers is not only her unique voice, it’s that people of all ages feel ‘instantly familiar’ with her and soak up her banter and on-stage charisma.” - The Music Review.

Perth based female jazz singer; Cathrine Summers is a sell-out artist. Since her 2008 debut, Cathrine Summers has lit up many events, festivals, high profile galas and regularly performs nationally and internationally. She’s a resident sell-out artist at local Perth and Melbourne jazz clubs, and has featured in revered festivals like, BRAVO! Cruise of the Performing Arts, Perth International Festival, Jazz by The Bay, sell-out seasons in Fringe World Festival 15, 16, 17 & 18, City of Perth New Year’s, Kings Park Festival and many more. Described as a cross between Dinah Washington and Anita O’Day, with a splash of Ella Fitzgerald, the UK-born vocalist is acclaimed for her rich timbre and broad vocal range. Her charismatic engagement with the audience is exhilarating.

With two ensemble styles in addition to jazz, Cathrine is equally at home performing contemporary top 40 and soul as well as jazz, which means you’ll often hear songs from greats such as Al Green, Stevie Wonder, Michael Jackson. Summers Soul is a 6-piece party band and Summer Groove 4-piece is a 'like a version' style groove, r&b ensemble. You'll hear favourite modern songs from the artists such as Adele, Amy Winehouse, JT, Pharell Williams and more.

Summers delights her guests with her infectious humour and natural playful charisma. She has a uniquely versatile tone that delivers warmth with a soft, floaty quality, as well as a raspy, deep and bluesy sound. Her undeniable on-stage charisma and playful banter gives her audiences a fun and mischievous candour. She’s known for being ‘instantly familiar’ and often weaves tid-bits of rich musical history from bygone eras into her performances. This on-stage banter mixed with world-class quality, an infectious passion for jazz that transcends eras and lots of fun has given her the title of the 'whole package’.

“The reliably lovely tones of Summers …. an integral part of the experience.” – Australian Stage

“We talked about Cathrine Summers Off-air and both felt the same way about her talent. Apart from accurate pitch and nicely controlled vibrato, she has the style and maturity to carry of the Great American Songbook compositions – just like her US idols.” – Ann Bolton and Ken Turnbull, Jazz Life Main FM 94.9 Victoria