IMPORTANT INFO ABOUT UNDER 18 PATRONS: UNDER 18 POLICY: Patrons under the age of 18 can attend but must be accompanied by a parent/legal guardian AT ALL TIMES (older siblings or cousins are not acceptable guardians). The parent/legal guardian attending the event acknowledges that they must remain within 2-3m of their minor at all times, to avoid any risk of separation, and your child/ren being picked up unintentionally by security, which may result in eviction from the event without refund.

Lee Kernaghan is one of the most undisputable all-time greats of Australian country music.

2017 will mark the 25th anniversary of Lee's amazing career launch, and the release of his first chart-busting hit "Boys from the Bush".

In celebration, Lee is coming to Melbourne, and will be heading to the Gateway Hotel in Corio to perform an exclusive outdoor concert, as a part of his "Boys from the Bush" 25th Anniversary Tour.

The "Boys from the Bush" 25th Anniversary Tour is guaranteed to be one of the most sought after concert tickets of 2017. This once off outdoor festival will cover 25 years of smash hits as Lee is joined on stage by some of the hottest Country Music Artists in Australia;

Including The Wolfe Brothers, Christie Lamb and lots more, all helping him celebrate this very special milestone.

Lee's iconic song "Boys from the Bush" was the first of many number one singles from the classic album The Outback Club, which went on to achieve double platinum certification, win a swag of awards and redefine contemporary Australian country music along the way.

Lee has notched up 34 number one hits on the Australian country music charts, won a staggering 36 Golden Guitars and has sold over two million albums in the local market.

The "Boys from the Bush" 25th Anniversary outdoor festival will also offer some great food and beverage options, no matter what your age.

Fans are encouraged to book tickets early to secure their place in what will be the biggest outdoor country festival to ever hit Corio...!! 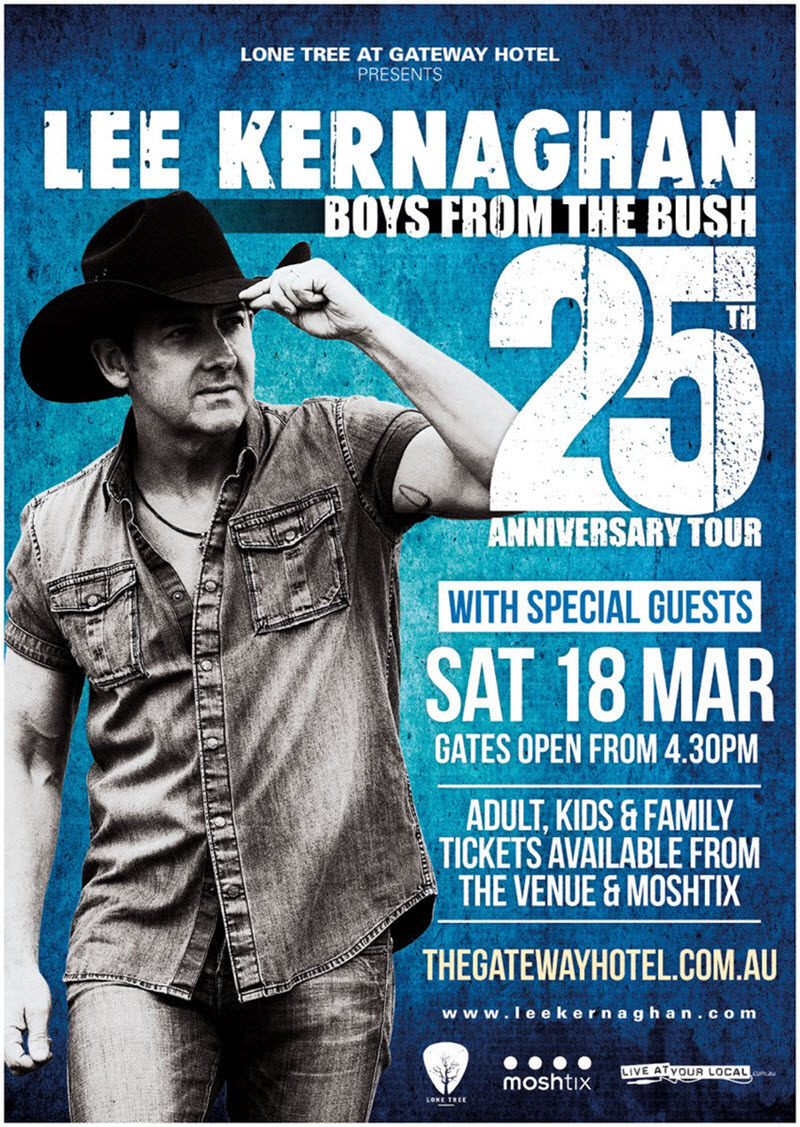 A Tribute to Ennio Morricone and the Wild West

My Boy, the third solo record from New Zealand singer/songwriter Marlon Williams, announces an artist emerging anew. Gone is the solemn, country-indebted crooner with the velvet voice – in his place comes a playful, shapeshifting creature. more »

THE DEAD SOUTH (CAN) - ONE FOR THE ROAD TOUR