Celebrating the recent release of their sensational sophomore album Malibu Nights, alt-pop masters LANY wind their way back to Australia for a massive national tour in July 2019.

Last here for a whirlwind trip in March this year, the dreamy 3-piece will stop in at huge venues in Brisbane, Sydney, Melbourne, Adelaide and Perth as they show off a record described by Billboard as "brimming with lyrics about love, longing and loss in the wake of heartbreak".

Malibu Nights is yet another feather in the cap for a band that has made success a habit since their 2014 formation. Incorporating more piano and earthier tones to their well- known synth heavy sound, it was written after singer Paul Klein suffered a particularly rough heartbreak and features huge lead single 'Thru These Tears', which has clocked up millions of YouTube views.

Regular visitors to Australia, LANY have forged a massive following on this side of the world. As Splendour in the Grass alumni, their local audience is growing with every show. They boast over 3 million monthly listeners on Spotify and are known to bring front-row fans to tears.

Forged on a whim when LA-based musicians Klein, Les Priest and Jake Goss decided to pool their collective talents, LANY (an acronym for Los Angeles, New York), was initially a home-made proposition.

"It was very do it yourself," Klein said of the early days. "We were led by conviction and instinct".

From this initial blush of prosperity came the foundations for any solid music career: touring. Hitting the road with the likes of Ellie Goulding, Troye Sivan and John Mayer as well as headlining their own massive shows, the band became known for their dedication to their growing fanbase.

Particularly huge in the Philippines, LANY also graced the main stage at Coachella and hit the live TV circuit on Late Night with Seth Meyers.

Not stopping to reflect on their achievements, Klein and co. headed straight back into the studio to record Malibu Nights - a record written in 48 days that documents the peaks and troughs of relationships and heartbreak. "The album from top to bottom lyrically and sonically is us really pushing ourselves and being brave," says Klein.

This bravery paid off in spades, and Australian fans will be able to hear these synth-heavy stunners for themselves at LANY's biggest shows to date in this county. 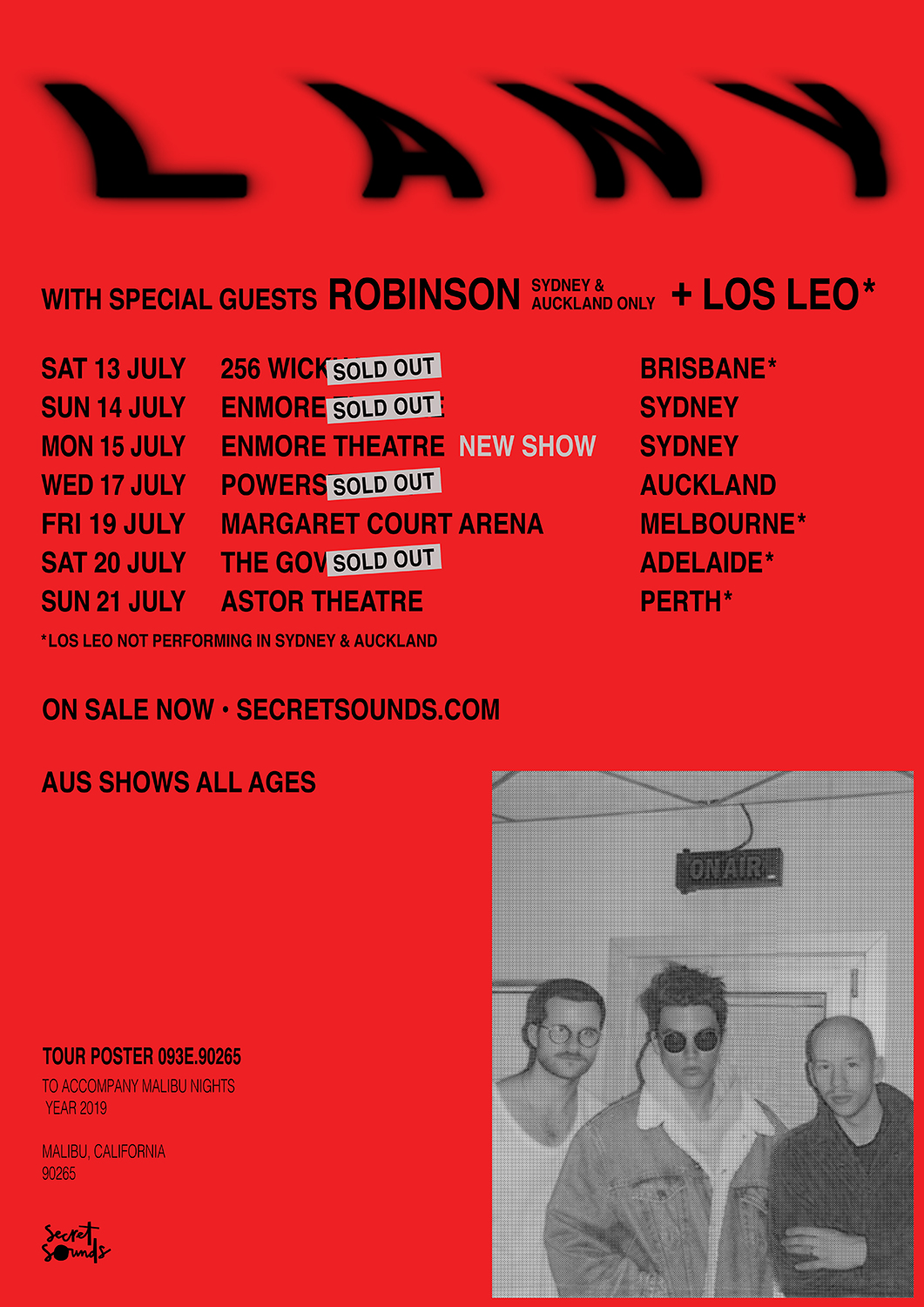 This event has been cancelled. All tickets holders have been emailed with relevant ticketing information. more »

Boy & Bear return to Townsville as part of their Suck On Light Tour! more »

Boy & Bear return to Brisbane as part of their Suck On Light Tour! more »