Few bands in recent years have shown the same level of dedication to their fanbase as Lagerstein, who have consistently hit the road spreading their love of partying, catchy pirate tunes, and growing their worldwide Lagercrew one ‘mate’ at a time. Now Lagerstein are returning to home shores this November with their massive new album ‘25/7’ and legendary stage show. Tackling some of Australia’s best stages, this crew of scallywags is ready to deliver the absolute pinnacle of rum fuelled madness live to all their Lagercrew!

Joining them are Melbourne’s ‘Heavy Metal Boiz’ Triple Kill, who since the release of their debut “Age of Rebellion” have been turning heads with their hilarious blend of Power and Thrash metal. Get in early as Triple Kill will perfectly warm up this evening with their mixture of hilarious onstage antics, and powerful engaging show!

Lagerstein’s new album ‘25/7’ is the band’s boldest and most creative take effort yet. With twelve catchy and hilarious songs from Australia’s favourite party pirates, it’s time to party for 25 hours a day and embark on a journey to steal an hour back from the sun! With their uncompromisingly tell-tale party attitude, Lagerstien once again take their crew on the ultimate party aboard the S.S Plunderberg!  Recorded in Sweden with world renowned producer  Fredrik  Nordström  (Bring Me The Horizon, Arch Enemy, In Flames, Soilwork), Lagerstein’s upcoming full-length will hit shores on August 23rd, 2019, via Kegstand Records.

“One moment you’ll be in a wall of death, and the next you’ll be sitting with the captain, drinking rum out of a glass duck, and singing about the wench that got away!”

“Mixing hilarious pirate shenanigans with rock and folk metal, the pirate crew hailing from Brisbane are known for their legendary stage show, which brings a house party to the heavy metal show.” 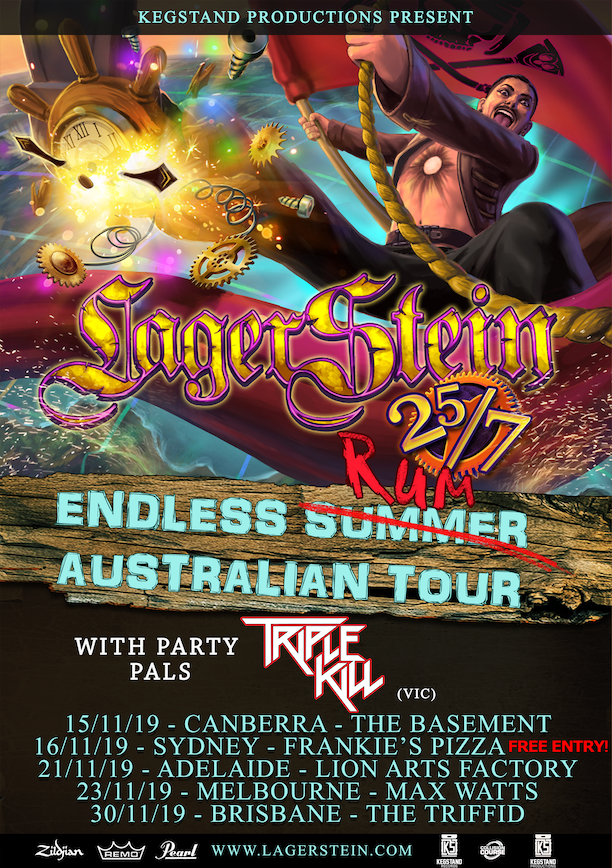