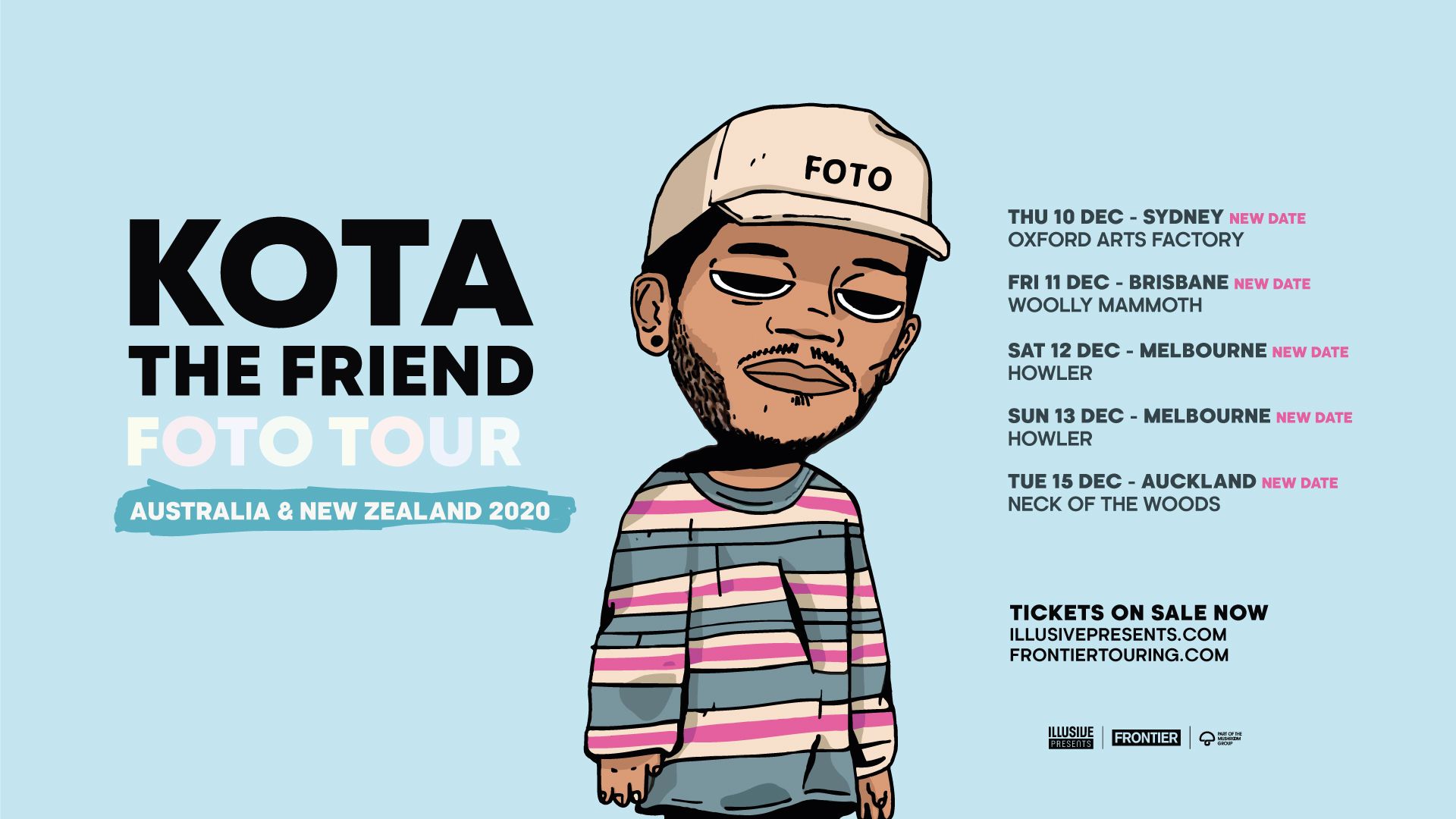 Illusive Presents and Frontier Touring wish to advise that KOTA The Friend will be rescheduling the Australian and New Zealand leg of his FOTO Tour to December 2020 (previously scheduled to take place in May). This rescheduling is due to the current COVID-19 crisis and subsequent government directives to restrict the size of all indoor public gatherings to no more than 100 patrons and the size of all outdoor gatherings to no more than 500 patrons in both Australia and New Zealand.

All existing ticketholders need not take action: original purchases are valid for entry at the rescheduled show dates and fans are encouraged to #KeepYourTicket and attend the rescheduled December shows.

Illusive Presents, Frontier Touring and KOTA The Friend sincerely apologise to any ticketholders affected by the rescheduling and thank fans for their understanding and support in these unprecedented circumstances.

Saturday 30 May date has been rescheduled to Saturday 12 December 2020. Your current tickets are automatically valid for this new date.

Illusive Presents and Frontier Touring are thrilled to announce that Brooklyn-bred, Manhattan-based MC KOTA The Friend will bring his FOTO Tour to Australia and New Zealand. The latest flamespitter in a long lineage of MCs, KOTA will perform debut headline shows in Auckland, Brisbane, Sydney and Melbourne in celebration of his latest release FOTO (out now through Flight Boys).

FOTO follows from KOTA’s three EP’s; Palm Tree Liquor (2016), Paloma Beach (2017) and Anything (2018) which all delivered a string of impressive singles including ‘Smile’, ‘Myrtle’, ‘Colorado’ and ‘HER’ parts ‘1’, ‘2’ and ‘3’. With previous projects wading through the fog of depression, FOTO presents an emerged artist who’s achieved mental clarity.

KOTA’s musical talent was evident at a young age. Classically trained on the trumpet and self-taught on the guitar, piano and bass, he progressed to produce his own music as well as videos from delving into the world of cinematography. Creating his own series ‘Lyrics To Go’ KOTA’s commanding yet relaxed tone is met with insanely intimate visuals with lyrics from his rap displayed at the bottom.

An altruistic artist oozing organic, cool charisma, KOTA The Friend’s debut headline shows are not to be missed! Experience first -hand the natural energy KOTA brings to the stage with his jazz and soul-rooted stylings.