The event organisers have been in touch to let us know the FLIGHT FACILITIES ADELAIDE show has been cancelled and will no longer take place on Saturday 9 April 2022 at Bonython Park, with refunds to be processed.

A message from the event organisers;

Unfortunately due to limited information from officials, the ambiguity and changes around COVID Management Plan requirements we have had to make the difficult decision to cancel the planned Flight Facilities event at Bonython Park.

Sign up for presale. Tickets on sale to general public from 9am local Tuesday 26 October.

Passengers, it’s been one helluva long layover but it’s finally time to prepare for boarding!

Described by the duo as a chronical of where they’ve been, where they are and where they’re going, FOREVER is the culminating result of a playground coloured by experimentation, set for release on 12 November. Drawing from various moments in time and Flight Facilities era-defined sounds, FOREVER is a record that gives as much back to the day-one fans, as it does to Lyell and Gruzman. Based on the outpouring of singles from the album so far, including ‘FOREVER’ featuring BROODS, ‘Move’ featuring DRAMA, ‘The Ghost’ and ‘Lights Up’ featuring Channel Tres, there’s no doubt FOREVER will have you on the dancefloor all summer long and take you sky-high when you catch it live.

Flight Facilities’ first Australian tour since 2018 is set to be a momentous event, with dates spanning the country and a bunch of the duo’s favourite artists joining them as they welcome us back to the dancefloor. Get ready for some sweet relief as the duo reignite the party vibes with one of the largest national tours back in 2022. 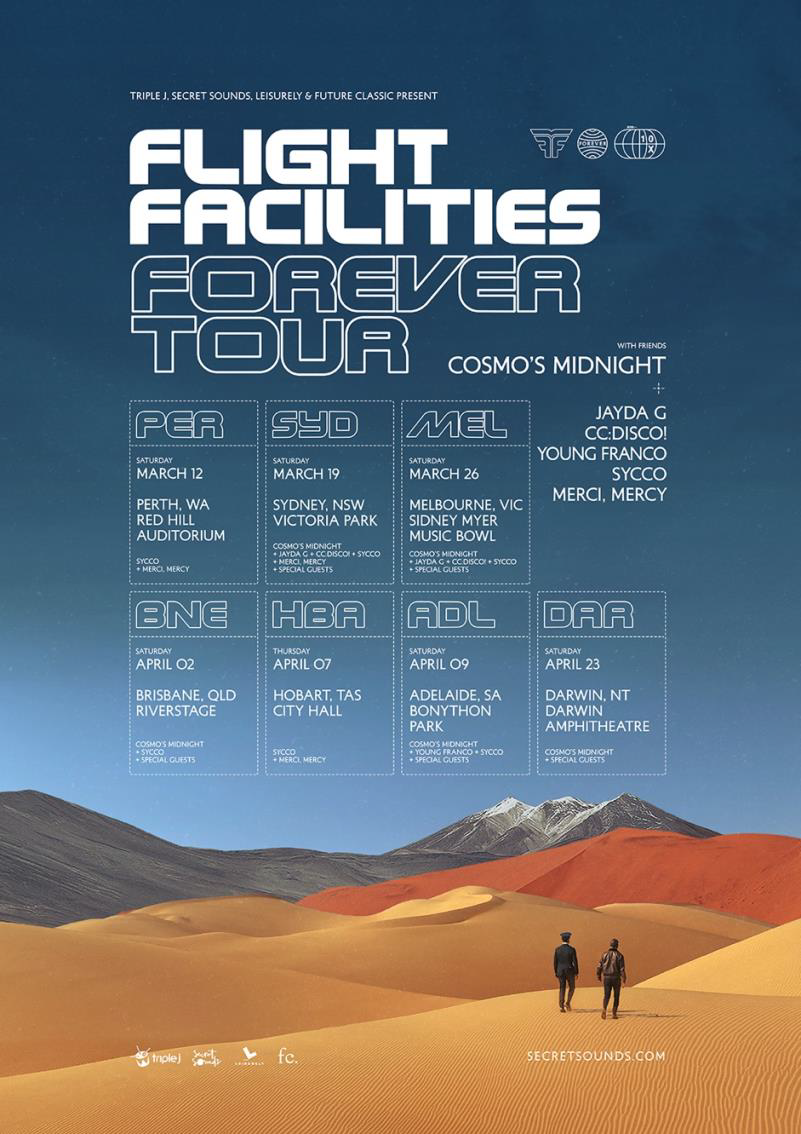 In Sydney, where Flight Facilities first spread their wings, Lyell and Gruzman have personally curated a special event, Airfields, to take place at Victoria Park on Saturday 19 March. Airfields is a homage to Flight Facilities home town, a salute to their first fans and a celebration of their musical roots in the fine city of Sydney.

“It will have been over two years since we last set foot on an Australian live stage, and it has felt like an eternity. Returning with an event in Sydney, where we first started, felt like the best way to reignite the flame for a live music culture that, while wounded, is alive and deeply important to us. Some of our favourite music memories have been within the crowds of Australian acts, and we wanted to showcase similar experiences, to plant the seed for the next generation of local artists.” Said Lyell and Gruzmen. “With support from Cosmo’s Midnight, Jayda G, CC:DISCO!, Sycco and merci, mercy, we figured the only way to celebrate, after years of being cooped up in a studio, is outdoors in the sun. It seems only fitting that Australian artists should be the ones throwing the first and biggest party of 2022.”

Flight Facilities are also giving one lucky winner and a friend the chance to win a trip for two to Airfields, including Business Class flights, 5-star accommodation, transfers to and from the concert and tickets for First Class treatment. To enter simply sign up to the Secret Sounds presale.

Flight Facilities started in the Sydney nightclub scene, coming off the back of Bang Gang and the Modular era. Airfields aims to re-create the vibe of the city when the duo first started performing, when Sydney was on the world stage for its music and night scene, something they hope to see again. Specially and personally curated, the event will feature a selection of Flight Facilities favourite local food and beverage outlets, along with exclusive surprise offerings, festival activations and one stacked lineup of party starting legends.

So gather your friends (!) and get ready to rejoice and revel as Airfields lands in the heart of the Harbour City with 8 hours of world-class local and international talent!

COSMOS MIDNIGHT – Airfields | Melbourne | Brisbane | Adelaide | Darwin
One of the most celebrated and progressive acts to emerge from Australia, Cosmo’s Midnight boast 225 million streams and 5 Gold singles. Their newest album, Yesteryear, marked the duo’s debut in the Hottest 100 with lead single ‘C.U.D.I’, which is also certified Gold.

JAYDA G – Airfields | Melbourne
Renowned for her high-energy performances as a DJ, Canadian born and London-based, GRAMMY Nominated producer Jayda G has risen steadily and stealthily through the dance music underground with her infectious energy, vitality and boundless enthusiasm.

CC:DISCO! – Airfields | Melbourne
DJ, radio host, curator, label head and party promoter - CC:DISCO! is hopelessly lost in music and there’s no turning back. Playing disco, house and boogie cuts with her heart at the controls, CC triggers a joyous feedback loop that infects the dancefloor.

SYCCO – Perth | Airfields | Melbourne | Brisbane | Hobart | Adelaide
Sycco is on an undeniable ascent, selling out her debut national headline tour, landing #29 in the Hottest 100 and being tapped by YouTube, Spotify, Apple and Amazon Music as a global emerging artist to watch.

YOUNG FRANCO – Adelaide
Young Franco is joining the fun too! Taking the stage with his smiling stage persona, epic jam selections and fantastic original productions. With collective streams clocking over 50 million on Spotify alone, he is one to watch!

MERCI, MERCY – Perth | Airfields | Adelaide | Hobart
Named in The NME 100: Essential emerging artists for 2021, crowned Apple Music’s ‘New Artist of the Week’ and one of the first Australian acts to be named Spotify Radar Artist, merci, mercy’s star is well and truly on the rise. Be sure to catch her kaleidoscopic alternative-pop.

Between the studio and stage, Flight Facilities remain fluid and confident as they defy trends, and seamlessly move between genres. From their humble DJ booth beginnings to their own headline shows and appearances at prestigious festivals - no matter the format, the delivery is always stratospheric.

Buckle up and prepare to cruise to the highest of altitudes when Flight Facilities’ FOREVER Tour lands at a venue near you!