Farmer and the Owl Festival

1ST RELEASE PAY WHAT YOU WANT HAS SOLD OUT!

Farmer & The Owl Festival is excited to announce it's return to Wollongong, NSW on Saturday March 14 for the second annual music and arts festival.

Following the inaugural sold out event in November 2013, which earned the festival fantastic reviews, positive public feedback and even a FBi SMAC Award nomination for 'Best Event', Farmer & The Owl Festival will return to the University Of Wollongong grounds over a number of indoor and outdoor stages.

The 2015 instalment sees international artists from USA, South Africa and New Zealand mixing it with top bands from across Australia and the best of the local crop with more to be announced. Farmer & The Owl Festival is proud to present to you the following lineup.

To kick off ticket sales for this year's event, Farmer & The Owl Festival is offering an Aussie music festival first by releasing a limited first allocation of tickets on a 'Pay What You Like' basis. In a reaction to the over-commercialisation of music and the arts, Farmer & The Owl Festival fans will be able to decide how much they want to pay. Once this ticket allocation is exhausted tickets will then revert to the normal ticket pricing until sold out.

But that is not all! With the goal of creating a unique event that carefully considers all elements of the festival experience Farmer & The Owl Festival have introduced a new concept for 2015 - The Imaginarium.

The Imaginarium reflects an uninhabited world of unique and vibrant creativity. There are no rules so to speak. This world or oasis exists as a secret and is something that has to be discovered. It is hidden within the depths of a more baron and possibly apocalyptic desolate wasteland... a metaphor for Wollongong? Maybe. Or perhaps it's just something fun and a way to cohesively create a world within a world. You decide.

To achieve the Imaginarium Farmer & The Owl Festival has enlisted the help of the best and most interesting bands and artists around. The first announcement consists of 24 bands with more to be announced, plus visual artists, digital projectionists and a whole host of interesting market and food stalls. The view is to expand and impress further on what was achieved after the first event and leave everyone who attends with his or her 'minds blown through sensory overload'.

This boutique festival was initially started by music promoters Yours & Owls and record shop Music Farmers as a way to showcase the most interesting talent from abroad as well as highlighting the cream of our very own Leisure Coast crop.

The event has now evolved from more than just a music festival. It has become a way to entice new bands and artist to Wollongong, many of which are rarely seen exhibiting their talents to the local inhabitants. It is also drawing new people and music fans into Wollongong and into a new and unknown place.

www.farmerandtheowl.com
Special thanks to our sponsors Coopers, Sailor Jerry & Jameson 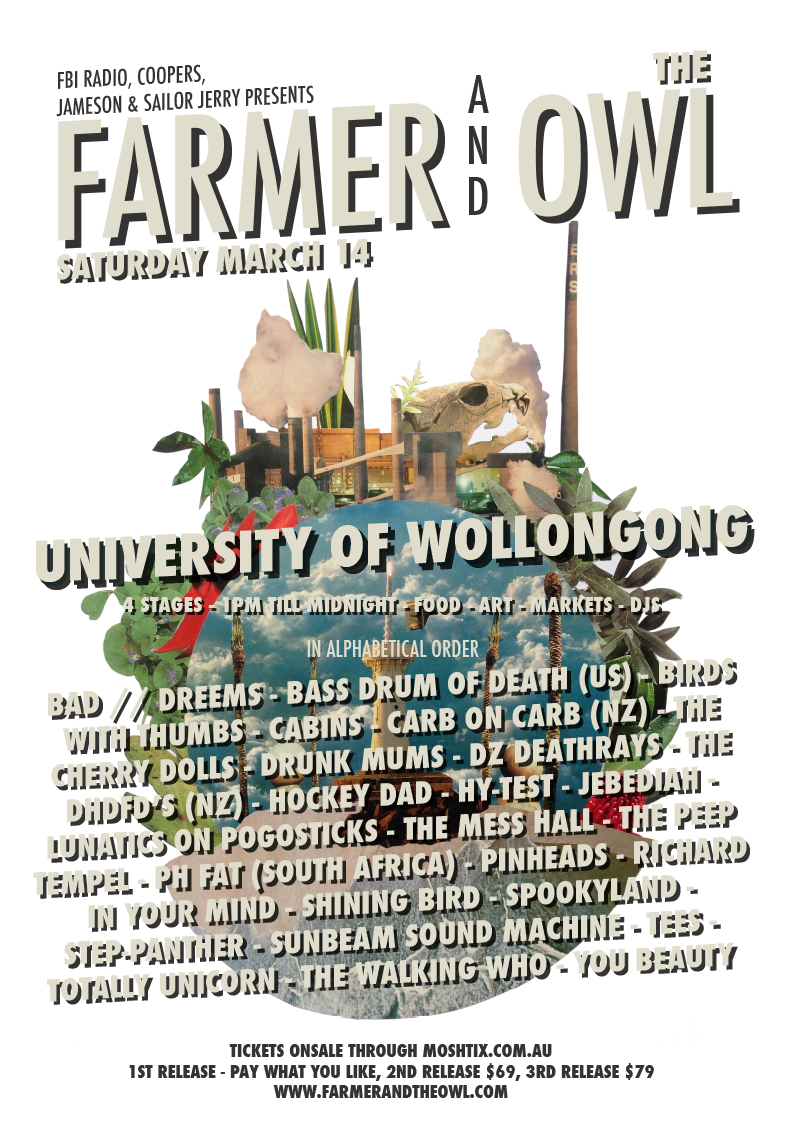