“Even thou the Cosmic Psychos never had the commercial impact or success that Nirvana and Pearl Jam had, they were still a major influence on them, and I think a lot of it had to do with the spirit and the sound of their music.” – Butch Vig, Record Producer.

The Cosmic Psychos are (almost) an Australian punk rock institution who formed in Spring Plains, Victoria in 1982, spearheaded by founding member and bass player Ross Knight.

To date, the band have released 10  studio albums since their self-titled debut (1987) and their influence has been global, with UK band The Prodigy sampling their music on 1997’s ‘The Fat of the Land’ LP and Nirvana producer Butch Vig proclaiming them an influence on both Nirvana and the Seattle grunge scene of the 1990’s.

In 2009, Eddie Vedder of Pearl Jam spoke candidly of the effect the band had on him growing up in Seattle. The band’s repetitive lyrics, fuzzed out guitar and wah-wah bass sound has remained unchanged over their 30 plus year career and continues to win over new audiences.

A documentary by film maker Matt Weston, released in 2013, titled ‘Blokes You Can Trust’ featured a whose who of global indie tastemakers and music makers espousing the Cosmic Psycho’s legacy in Australian musical history. The documentary has given the band new life and they currently find themselves fielding touring and interview requests as far flung as Spain, Germany and Costa Rica.

It’s been a wild ride for the Psycho’s mainstay Ross Knight who originally formed the band in 1982 for ‘shits and giggles’.  He’s been trying to balance the demands of fronting one of Australia’s defining punk bands and managing his vast third-generation farm ever since;  which includes running cattle, tending a vineyard and volunteering his time and tractor to the local fire service.

Rounding out the Psycho’s line-up since 2005 is Melbourne born Dean Muller on drums and John ‘Mad Macka’ McKeering on guitar. Macka (formerly of Brisbane stalwarts The Onyas), has spent time as a lawyer, pizza delivery driver, carpet factory worker, bartender and swim coach. These days, when not hanging with the Psycho’s he teaches punk rock chords to guitar students and regales beginners with stories about the time he once beat Olympian swimmer Kieran Perkins in a medley race.

The Cosmic Psycho’s have survived the passing decades, musical trends and fashions with ease.  Most fans will tell you they’re simple blokes (you can trust), just making straight-ahead, good-fun, Australian influenced punk rock.

In 2019, the Cosmic Psychos celebrate 30 years since the release of their second album ‘Go the Hack’ – which perfectly sums up the career trajectory of one of Australia’s most loved bands. 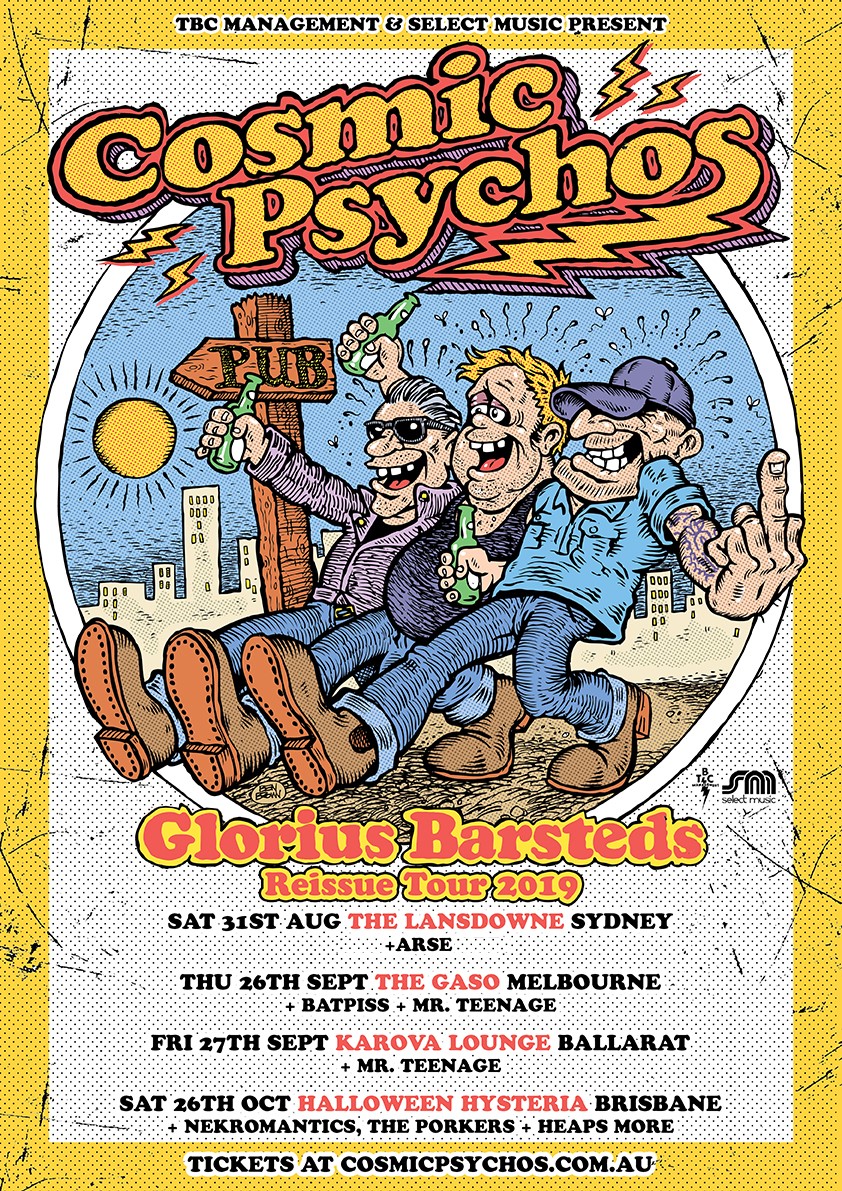