Perambulator Music is proud to present BIRDZ and OMAR MUSA together in Darwin for the first time.

Book tickets early as this will sell out!

BIRDZ
Birdz has solidified his spot as one of the most exciting hip-hop acts in the Australia. Since releasing his debut EP in 2013. The N.T. raised rapper has secured strong backing from triple j, triple j Unearthed and community radio around the country, lending to the Butchulla emcee's increasing popularity. Birdz' consistent track record of releases has seen him share the stage with high profile acts such as Briggs, The Funkoars, Joelistics, and the Thundamentals on their 2015 'Elephant In The Room' tour. Delivering an honest and undoubted stage performance, Birdz continues to build a strong foundation with audiences deeming him a future leader of the Australian music scene.

His debut album "Train Of Thought" dropped in August 2017 and was named by the AU REVIEW as one of their top 20 Australian Albums of 2017, this lead to him having a huge run of shows at Woodford Folk Festival and bringing the New Year in at NYE On The Hill.

OMAR MUSA
Omar Musa is a rapper, author and poet from Queanbeyan, NSW. He has released two solo hip hop records and an album with international duo MoneyKat. He has shared stages with acts such as Dead Prez, Pharoahe Monch, Gil Scott-Heron, Horrorshow, Thundamentals and Daniel Merriweather.

He has appeared on ABC's Q&A and received a standing ovation for his performance at TEDx at the Sydney Opera House. His debut novel "Here Come the Dogs" was longlisted for the Miles Franklin Award and he was named one of the Sydney Morning Herald's Best Young Writers in 2015. At the end of 2017 he released "Since Ali Died". The album is based around the idea that ever since his childhood hero Muhammad Ali died, Omar Musa feels like his life fell apart: loved ones died and got locked up, he found love and lost it, he lost his sanity, he saw a tangerine fascist take hostage of the world. 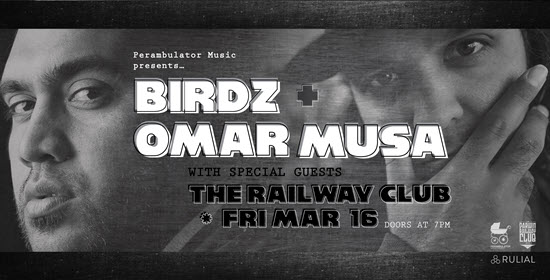